New Jersey – Birthplace of the Drive-In 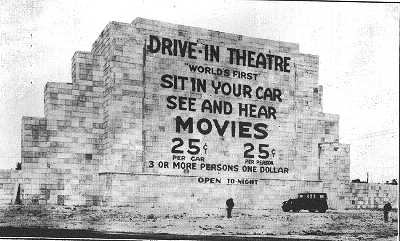 The First Drive-In Theater was invented by Richard M. Hollingshead. Richard experimented in the driveway of his home at 212 Thomas Avenue, Camden, New Jersey. Richard mounted a 1928 Kodak projector on the hood of his car, he used it to project onto a screen he had nailed to trees in his backyard. He placed a radio behind the screen for sound, then started his test of his idea. Richard tested sound with the windows up, down and half way. He tested many weather conditions, using his lawn sprinkler he simulated a rainstorm. He liked what he saw and heard, except for one problem.

If cars were parked behind each other, the cars at the rear would not be able to see the whole picture, due to the car in front. This did not stop Richard, he lined up cars in his driveway spacing them at various distances and placing blocks under their front wheels he was able to find the correct spacing and the correct angles to build ramps for the cars front tires to park, He then filed the first Patent for the Drive-In Theater.

In 2010 New Jersey has just one Drive-In theater, but that’s better news than 10 years ago when there were none. The closest Drive-In was in Warwick, NY, which to be fair is only a few miles over the NJ/NY border.