The vote is in and we have decided to cover the NY Giants and the NY Jets due to the fact that they play all of their home games in the beautiful Garden State. Every Saturday we will have a posting on the upcoming games for both teams. With that said, let’s get started!

Week two is a tough schedule for both teams. The Jets play at home against the division rival New England Patriots and the Giants head off to Indianapolis in a game of sibling rivalry against the Colts. Whether you are a Jet fan or a Giant fan, both games are sure to not disappoint and will provide hours of entertainment and enjoyment this Sunday. 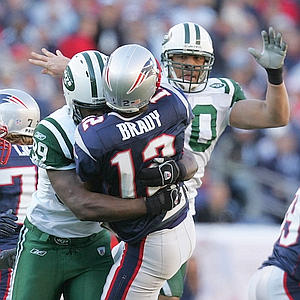 The Jets opened up their season last weekend as the favorites but ended up with a tough loss to the Ravens, and the Patriots, well, looked like the same old Patriots as Tom Brady carved up the Cincinnati Bengals defense to shreds as predicted. With the Jets loss to the Ravens, the tides have changed on how much the Jets need this weekend’s game. Will the Jets really start off the season 0-2, losing the first two home games? Will the Patriots back up their smack talk of the Jets and beat them on the road to start the season 2-0 in an AFC showdown game.

Both teams have put enormous targets on their backs as Tom Brady of the New England Patriots stated he “Hates the Jets” and refused to watch the NY Jets reality show “Hard Knocks,” and who can’t forget NY Jets head coach Rex Ryan’s first interview in NY as he stated “I am not here to kiss Bill Belichick’s rings.” Face it folks, these two teams absolutely hate each other, and Sunday is going to prove which one could really back up their own smack talk. The rivalry is also in the heads of the Jets pro bowl corner back Darrelle Revis and the Patriots pro bowl wide receiver Randy Moss, as the two have already started taking jabs at one another. Right now Randy Moss has the upper hand as Revis suffered a tight hamstring injury in Wednesday’s practice.

So why not head on over to the Meadowlands on Sunday for some good old crazy tailgating with Jet’s fans, or tune in to CBS and watch a game that is promised to provide old school head stomping football. 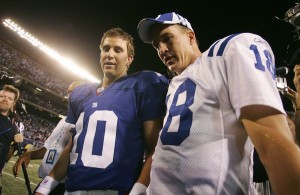 The Giants won the coin flip and were awarded the first home game last week at the New Meadowlands stadium. They did not disappoint as both their offense and defense opened up a can of whoop-ass on the Carolina Panthers to start off the 2010 season on a high note. The Indianapolis Colts on the other hand, well, did the exact opposite as the Houston Texans offense ran up and down the field like it was track and field practice, upsetting the Colts and putting them in a 0-1 hole.

With the Giants win and the Colts loss, bragging rights are up for grabs this Sunday as the 2007 Super Bowl MVP Peyton Manning takes on his baby brother, the 2008 Super Bowl MVP, Eli Manning. We’ll be watching quite a clash of the titans on national TV Sunday night. It’s definitely a must-see game.

While the Giants and Colts are not considered rivals—they do not even play in the same conference since the Colts play in the AFC and the Giants in the NFC—this game is all about Manning vs. Manning, big brother vs. little brother, teacher vs. student, Obi Wan Kenobi vs. Anakin Skywalker. Two quarterback brothers out to prove which one is better. Pure insanity as fans other than the Giants and Colts will be tuning in to this game just to witness the brotherly rivalry.

The way the Colts lost last week showed the Giants what they must do to win—run, run, run, run, and run the ball all day against a weak Colts defense. By running the ball, that will keep Peyton Manning off the field longer, opening up more opportunities for the Giants offense to score. Last week the running back for the Houston Texans, Arian Foster, ran for 231 yards and scored three touchdowns against the Colts defense. Look for Giants running backs Ahmad Bradshaw and Brandon Jacobs to get lots of work this week, as Eli Manning should be feeding them the football all day while Eli’s favorite target of week one, Hakeem Nicks, is a game time decision for Sunday’s game. Keeping Peyton Manning off the field for as long as they can, and running the football, should turn into a win for the Giants and have them starting off the season 2-0.