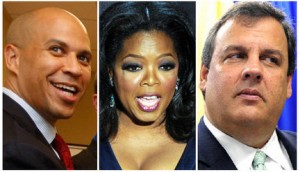 Oprah to Host Booker, Christie and Zuckerberg on Friday Show

Might want to watch Oprah tomorrow afternoon.  New Jersey bigwigs, Newark Mayor Cory Booker and Governor Chris Christie, along with Mark Zuckerberg will be on the show to officially announce Zuckerberg’s gift to Newark’s School System of $100 million.  Despite this extremely generous gift, NJ is up in arms over why it’s being given, who it’s being given to and even the timing of the gift.

Really people?  We can’t just celebrate that Newark is getting national attention and a very generous and extremely large gift from a person who could use his money in millions of different ways?

Some say that Zuckerberg is only giving the gift to take the focus off the movie about Facebook called The Social Network which comes out next week.  Others are saying that it isn’t fair that Newark gets all the money while the rest of New Jersey’s schools are also suffering.

What do you guys think?  We’re happy for Newark and disappointed in the nay-sayers who are looking a gift horse in the mouth.