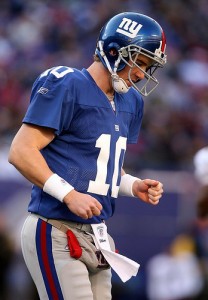 Why Does This Always Happen To Me?

How does a team who has more rushing yards and passing yards than the opposing team lose? Just ask the NY Giants about their Week 3 game against the Tennesse Titans and they will tell you the answer—you beat yourself and you find ways to lose. That is just what the Giants did against the Titans on Sunday as they outplayed them in every category, BUT still lost 29-10. Penalties, penalties and more penalties. Most of the time when the Giants reached the red zone, they found some way to lose the ball and turn it over to the Titans. Whether it was a fumble, an interception, or a unsportsmanlike penalty, the Giants found a way to not win.

Games unfortunately happen like this, but how do you recover? Giants coach Tom Coughlin took full blame on the aftershow, but we all know that is a coverup to how bad his team played. How can it be the coach’s fault that his players were making bad decision after bad decision without any empathy? Will the coach bench the players that caused all the penalties next week? Will there be consequences? We will all find out next Sunday night as the Giants are home again to face Da Bears in what is now a must win game for the Giants. No matter how you look at it, this Giants team is a mess, and they have less than a week to figure this mess out. 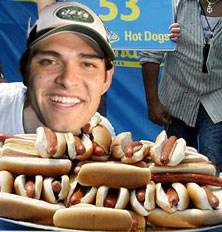 You are what you eat

Mark Sanchez shined, Dustin Keller shined, LT2 shined, well the whole damn Jets team shined on Sunday night as they came out of Miami with a 31-23 road victory. This is the kind of game the Jets have been smack talking about all this season and last offseason, and for the second week in a row they have backed up their smack talk with two wins against divisional rivals. Superbowl contendors? Not yet. A force to be reckoned with in the AFC? Damn straight. Watch out, as the Jets are not only talking a big game, they are showing up and playing a big game.

Highlights of the game came from tight end Dustin Keller and his two touchdowns, LT2 has a goal line dance, and even Braylon “I can’t stay out of trouble” Edwards had 87 yards and an end zone dance of his own. All of the Jets offense was involved and did their parts this week, giving the Jets two great wins in a row now.

Pin It
Previous post:
Does New Jersey Really Need More Handguns? Next Post:
Bon Jovi No Longer Living on a Prayer That They’ll be Inducted into Rock & Roll Hall of Fame… They’re In for 2011!