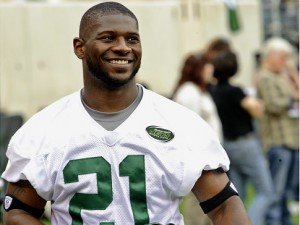 Just as predicted, the Jets just stomped out the Bills on Sunday en route to a 38-14 victory. I watched every play in this game and for one brief moment gained some sympathy for the Bills. Nobody on the Bills defense could stop the Jets running game, or the passing game for that matter. Both Jet starting backs rushed for over 100 yards. I’m sorry but if you are the Bills owner what do you say to your defensive coordinator the next day? Good job son? Way to go champ? The Jets just embarrassed the Bills in Orchard Park.

Mark Sanchez hooked up with Dustin Keller, again, for two TDs and found Braylon “no more butter fingers” Edwards wide open for another TD. This Jets offense is clicking on all cylinders right now and they are only going to get better as they have Santonio Holmes coming back for week 5. Jets fans have to be excited after this beating of the Bill’s as some predicted this game to be a trap game for the Jets. So far, I love what I am seeing out of Gang Green.

After the 9th Time Guys it Really Doesn’t Hurt. Seriously, Don’t Worry About Blocking Me

Watching the game, it looked as if Coach Coughlin put a piece of red meat around Chicago quarterback Jay Cutler’s neck and had the Giants defense acting as ravenous dogs. Honestly, I cannot recall watching a quarterback get sacked as much as Jay Cutler did. Before half time, Cutler was sacked 9 times and left the game with a concussion. Ironically Giants are 2-2 this year and with both wins, the opposing quarterback left the game with concussions. I believe the Giants have found a way to win games, kill the quarterback.

The Giants defense was stellar in this game and the offense was just so-so as Eli Manning threw for 195 yards and o TDs. Who needs a whole lot of offense though when your defense is putting fear in the hearts of opposing quarterbacks? Giants won this one easily 17-3.