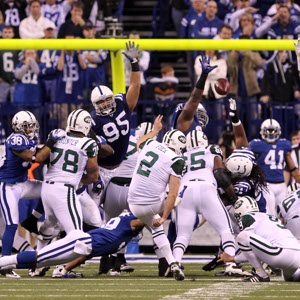 Rex Ryan sure did talk a lot before Saturday night’s wild-card game against the Indianapolis Colts.  He even said that it was  “personal” against Peyton Manning and Reggie Wayne.  Well he didn’t put his foot in his mouth.

The Jets have redeemed themselves for last year’s 30-17 loss in the AFC Championship.  They scored the same amount of points as in that game but it was enough as they beat the Colts 17-16 on a 32 yard field goal by Jet kicker Nick Folk as time expired.  An exciting finish as Jet fans had to be nervous when Adam Vinatieri kicked a 50 yard field goal, his longest since 2008, with 53 seconds left.  Enter cornerback Antonio Cromartie.  He returned Vinatieri’s ensuing kickoff 47 yards to the Jets 46 yard line.  From there Sanchez led the offense as a veteran like, well, Manning would have.  Three plays later and an odd time out call from Indy coach Jim Caldwell (did you catch Manning’s “Why, what?” look?) and the Jets survive round 1.  But they can’t rest now… 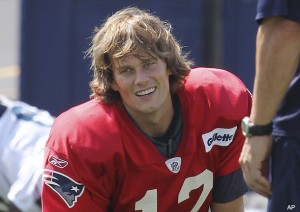