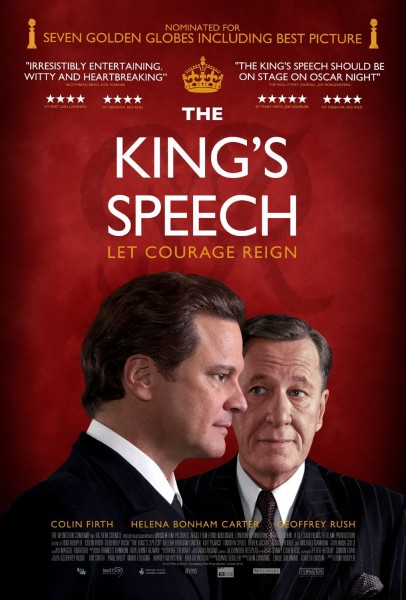 The King’s Speech is based on a the true story of King Edward VI’s speech impediment and his efforts to correct the problem. Public speaking was of critical importance as the King of course, but even before becoming King as the Duke of York. A politician’s public persona was dependent on how they came across on the radio to the people. Colin Firth plays the lead role and Geoffrey Rush plays the speech therapist that helps him manage his speech to the point of being able to give one of the most important speeches in the history of England.

This is a very intimate movie about a political figure and important historical events. I couldn’t help noticing a similarity between this film and another excellent film this year, Black Swan. Both films feature a character that is capable of greatness but has flaws or issues that they must deal with. Of course, the end results are not the same. Prince Albert’s greatest supporter is his wife, Queen Elizabeth, played by Helena Bonham Carter. She finds the therapist and pushes him.

Colin Firth delivers a very well thought out performance of someone with a stammer without it being overdone. Both he and Geoffrey Rush should and probably will receive Oscar nominations. The heart of the movie is the relationship that builds between the two characters as they work on turning a great man into a man who can speak with greatness and deliver the confidence inspiring speeches that he will need to to serve his country.

This is a beautiful movie to look at with amazing cinematography. From the detailed and spectacular set design to the use of super-wide angles and telephotos. The wide tracking shots and composition using negative space is like a work of art in motion at times.

The only drawback is that the movie is slow-paced and some people may find it boring at times. Other than that, this is a great film. Just relax and take the movie in at it’s own pace.