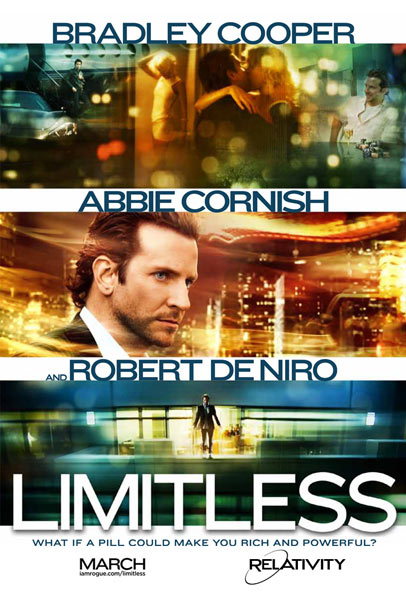 Limitless is the kind of movie that has a catchy premise. What if you could take a pill that would let you use 100 percent of your brain and turn you into the perfect version of yourself? The commercials clearly get the message across and lure you in. The question I always have for this type of movie is : Will they fully explore the idea and take it to a logical and satisfying conclusion? Some movies do, but many fail.

I can honestly say that this movie sucessfully runs with the idea and it gave me a lot more than I expected, even if it loses a little of it’s conviction in the end, much like The Adjustment Bureau. Bradley Cooper stars as Eddie Morra, a divorced, broke, down on his luck writer with a bad case of writers block. He runs into his ex-wife’s brother and offered the pill, called NZT. The film uses special effects and camerawork to visually sylize many aspects of the story and recurring plot elements. Color temperature, a telescoping zoom effect that is difficult to describe, saturation and lack there-of, and other visual effects give information to the attentive audience members about what is happening to the characters in the story. The movie also pulls off the sometimes difficult task of bringing action and excitement into a cerebral story to appeal to a more mainstream audience without looking like it is pandering.

Bradley Cooper is an actor that I have been following for a long time through Wedding Crashers, Failure to Launch, Kitchen Confidential and Yes Man to name a few. He has had mostly supporting or co-starring roles with a couple of leads. But he really achieved the most exposure and recognition in The Hangover. To anyone who has been paying attention, it should be no surprise that he can easily carry a movie of this magnitude as the lead. Robert DeNiro, Abbie Cornish and Anna Friel give seamless supporting performances, and the story unfolds in a way that gives the audience increasing insight to drug and its consequences. If you think the idea is interesting, you will appreciate the effort put in to build a real story around it.

Pin It
Previous post:
Don’t Worry, We Still Won’t Have to Pump Our Own Gas! Next Post:
March Madness