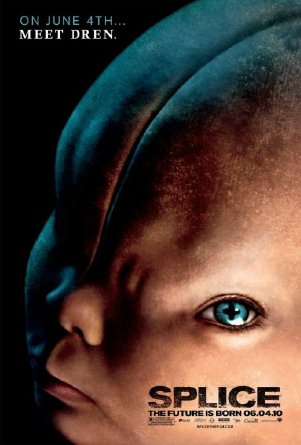 Splice stars Adrien Brody as Clive Nicoli, Sarah Polley as Elsa Kast, and Delphine Chanéac as their creation. Clive and Elsa are a couple of scientists who decide to push the envelope of their experiments by mixing human and animal DNA. It is a mixture of science fiction and horror/suspense. Similar concepts have been explored, many times with silly B-grade horror movies. So does this movie fall into that trap or does it deliver?

The commercials had me thinking that it could go either way, so I was in no hurry to rush out and see it. I never made it to the theater to see it so I caught it on Cable instead. I was pleasantly suprised at how good this movie is. This movie is serious about taking the premise as far as it can, and is not scared to tackle the possible ramifications of the situation. This movie is far more mature and intelligent than I expected. This is a smart well-acted, raw and brave movie in the spirit of Altered States. These filmmakers were not scared of going down a path that results in some disturbing situations.

A really nice aspect of the film is that the story does more than just create horror and suspense. It also spends time and good dialogue and acting developing the two lead characters and their creation. Having only 3 leads, the movie has a very intimate feel to it. That really helps as we learn about all 3 characters personalities, flaws, motives and the complex relationships betwen them. Don’t expect a lot of scares or excitement, but do expect a very well thought out story and characters and an engrossing film.