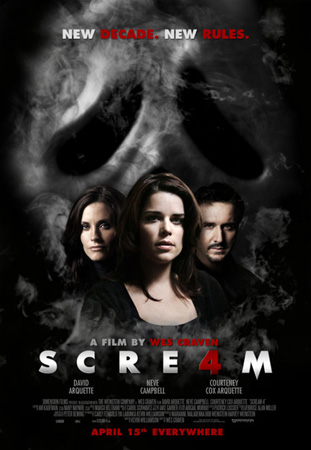 In 1996, Wes Craven’s original Scream redefined the slasher genre and re-energized horror movies in general by being not only scary, but intelligent and clever as well. Now the long awaited 4th installment is here and in the 11 years since the last installment, the landscape of horror movies has changed tremendously. So the question is, can Scream work in this new environment?

This movie strikes the same tone as the previous Scream movies. That feeling of tension nd the possibility that anything can happen at any time. Early on, the  movie has a very self-conscious attitude about horror movies, and at times there is discussion of what a serial killer needs to do to stay relevant and contemporary. But none of that is what the movie is really about. Toward the end you will find out the true social commentary, and unlike some othermovies recently it is not preachy, makes perfect sense, and validates a certain character’s motives.  And this movie has a smaller commentary about sequels. In some ways, this is a sequel that is about sequels and remakes it has some good things to say on that subject that some other filmmakers could learn from.

But what I really respected more than the well put together story was the way the movie balances the original cast with the newer characters. A lot of sequels that have a sizable amount of time pass want to give the returning cast small roles and hand the movie over to the newcomers. Like poor Bruce Boxelietner in Tron Legacy. This film cares about both the original cast as well as the newcomers. Another plus is that movie doesn’t betray the previous installments like say, Tron Legacy. Instead of a sequel where the makers either didn’t see the earlier movie(s) or just dont care, in the case of Scream 4, this movie follows the other 3 in a way that makes sense and cares about the history and mythos of the franchise. Fans of the first 3 should really appreciate this. This is a movie that gives sequels a good name.

Pin It
Previous post:
475,321 Pieces of Garbage Cleaned from Jersey Shore in 2010 – Snooki Not One of Them Next Post:
New Jersey is Old and Rich So We Keep Our Landlines