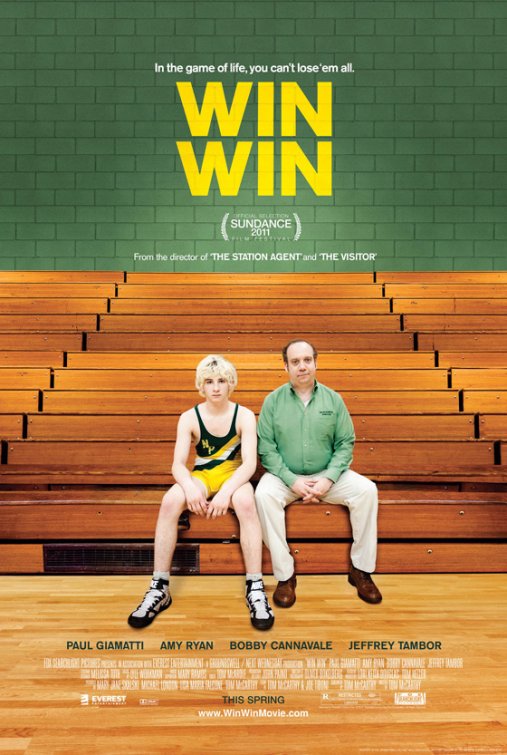 Win-Win stars Paul Giamatti as Mike Flaherty, a stressed out and down on his luck Lawyer. He coaches a high-school wrestling team along with Stephen (Jeffrey Tambor), an accountant with whom he shares ofice space. Having trouble making ends meet, his life gets a lot more complicated when he becomes the legal guardian of Leo (Burt Young) , who is one of his clients. When Leo’s grandson Kyle comes to visit, Mike discovers that he is a wrestling star. All of a sudden the mediocre wrestling team Mike coaches ay be able to go places.

Mike’s best friend Terry, played by Bobby Cannavale finds out about the prodigy and becomes the defacto 3rd coach of the wrestling team. Cannavale brings his fun, wacky and cool personality to the role, a good contrast to Giamatti. You get the feeling that Kyle has escaped from Ohio, and his hard to find mother, and there is a certain amount of mystery behind his behavior that is revealed later. Amy Ryan plays Jackie, Mike’s supportive, but sometimes hot-headed wife that develops a concern for Kyle’s well being.

This is a movie about people, their relationships, and their behavior under complex circumstances. Character driven and honest, this film understands and explores that people are flawed, and the same person has the capacity for making good descisions as well as bad ones. It also demonstrates how someone can flourish in one environment, but be unsettled and ruined in another. This movie strikes a similar tone to Director Tom McCarthy’s previous 2 films, “The Station Agent” and “The Visitor”. It demonstrates how the introduction of strangers into a person’s life can have profound results.