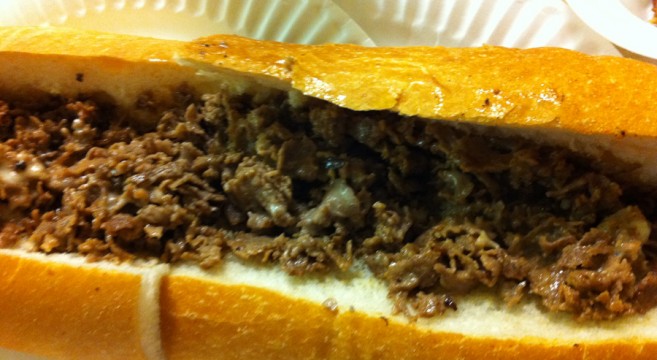 We inadvertently stumbled upon the Yellow Submarine hoagie shop when another restaurant we wanted to go to was packed and we bailed on it. It kind of always works that way, doesn’t it?  The best places are ones that you find through serendipity.

It was the sign stating that they had South Jersey’s Best Cheesesteaks that brought us in.  Really??  In this little place? 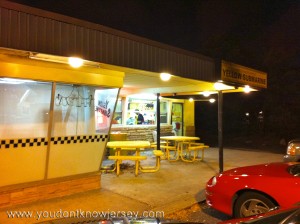 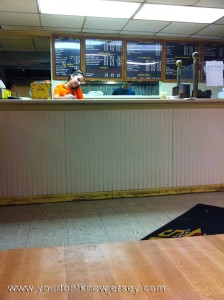 The gaggle of teens outside the place on the night we were there were being tormented by a baby squirrel that the restaurant seems to be feeding.  It was pretty funny to watch these hulking teen boys be frightened of the teeniest squirrel you’ve ever seen.

Once we got our onion rings (that were ready before the sandwiches), we knew what the squirrel wanted.  These onion rings weren’t just an afterthought.  They were spicy and super-crispy.  Really, really good. 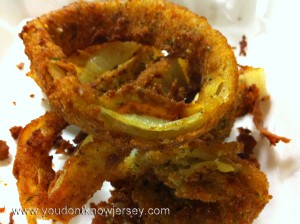 My cheesesteak arrived without onions and peppers and when I looked at the board again, I saw where I went wrong.  I’m used to just having one basic option and here there are many toppings you ask for.  Since I didn’t ask, I got plain.  It was actually nice.  Next time, though, I think I’ll be ordering some veggie toppings.  The beef was very thoroughly chopped and didn’t seem like a plain old Steak-Ums.  It was really good.  The default cheese appeared to be provolone but it was so melted into the meat that it was a little hard to discern what kind of cheese it was exactly.  Whatever it was, it was good!  It wasn’t over-stuffed and hard to eat but it wasn’t skimpy either.  Judging by the amount of traffic they were getting pretty late at night, lots of other people agree that the cheesesteaks are good.  I should also mention that I got the SMALL sandwich.  The teen toughies (except when a squirrel was around) got the large sandwiches and they looked like they were about three feet long.  Amazingly big!! 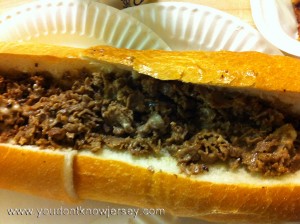 We also got the sausage, peppers and onion sandwich. We are big fans of J.R.’s in Seaside when it comes to sausage sandwiches.  And, this was equal or better than J.R.’s.  Yes, we said it. 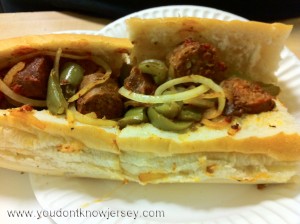 If you’re ever around Moorestown, Maple Shade or Cherry Hill, head over to Yellow Submarine and test their Best Cheesesteaks in South Jersey claim.