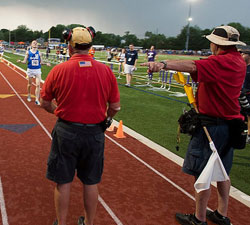 Imagine you are running an eight-lap race, you are making a record breaking pace, you have finished the first seven laps with just one to go, and right then you are forced off the track and the event is evacuated. That is what happened to Joe Rosa, one of the top high school distance runners in the country.

Officials with the New Jersey Interscholastic State Athletic Association halted the eight-lap race as Rosa was preparing for his final lap, because lightning had been detected in the area. The meet was being held in Old Bridge, N.J. NJSIAA officials made it clear: Rules dictate all events are halted and the competitors and fans must immediately leave the area if lightning is detected.

The decision, however, did not sit well with Rosa, his family (including twin brother Jim who was in second at the time), his coaches and others who questioned why they couldn’t run one more lap – or why the race was allowed to start in the first place.

Obviously, Joe Rosa and his family are not happy that he was not allowed to finish the race, but if lightning has struck, they may feel differently. Weather conditions interfering with sport events occurs from time to time. A good idea would be to have a waiver that an athlete could sign to indicate that they take responsibility for their actions if they decide to continue when a warning is declared. They could still evacuate the crowd and anyone who wants to leave or take cover but if you feel the risk is worth it, which I am sure he would have, then you can finish.