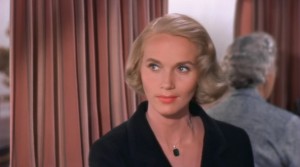 Saint was born in Newark, New Jersey, the daughter of Eva Marie and John Merle Saint.

She attended Bethlehem Central High School in Delmar, New York, graduating in 1942. Eva Marie was inducted into the high school’s hall of fame in 2006. She studied acting at Bowling Green State University, while a member of Delta Gamma Sorority. There is a theater on Bowling Green’s campus named for her. She was an active member in the theater honorary fraternity, Theta Alpha Phi and served as Secretary of the Bowling Green Student Government in 1944.

Her introduction to television began as an NBC page. She appeared in the very early live NBC TV show “Campus Hoopla” in 1946 – 47, and her performances on this program are recorded on rare kinescope and also audio recordings of these tele-casts as preserved in the Library of Congress. She also appeared in the 1949 Bonnie Maid Versa-Tile Varieties NBC program as one of the singing Bonnie Maids used in the live commercials. She appears in 1947 Life Magazine special on Television and also in a feature Life 1949 article on her as a struggling TV actress trying to make ends meet in NYC.

In the late 1940s, she continued doing extensive work in radio and television before winning the Drama Critics Award for her Broadway stage role in the Horton Foote play, The Trip to Bountiful (1953), in which she co-starred with such formidable actors as Lillian Gish and Jo Van Fleet. In 1955, she was nominated for her first Emmy for “Best Actress In A Single Performance” on The Philco Television Playhouse for playing the young mistress of middle-aged E. G. Marshall in Middle of the Night by Paddy Chayefsky. She won another Emmy nomination for the 1955 television musical version of the Thornton Wilder classic play Our Town with co-stars Paul Newman (in his only musical) and Frank Sinatra. Her success and acclaim were of such a high level that the young Saint earned the nickname “the Helen Hayes of television.”

Saint’s first feature-film role was in On the Waterfront (1954), directed by Elia Kazan and starring Marlon Brando – a performance for which she won the Academy Award for Best Supporting Actress. Her role as Edie Doyle (whose brother’s death sets the film’s drama in motion), which she won over such leading contenders as Claire Trevor, Nina Foch, Katy Jurado, and Jan Sterling also earned her a British Academy of Film and Television Award nomination for “Most Promising Newcomer.”

Later, she became one of the “Hitchcock Blondes” in Hitch’s classic thriller North by Northwest.

Pin It
Previous post:
What’s Fresh This Week at the Farmers’ Markets? Next Post:
Have a Great 4th of July!