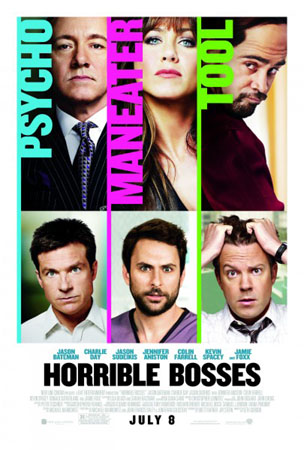 Horrible Bosses stars Jason Bateman, Jason Sudeikis, and Charlie Day as three men whose bosses are making their lives miserable. Those bosses are played by Kevin Spacey, Jennifer Aniston and Colin Farrell. Every night they discuss their situations and they eventually come to the conclusion that themselves and others would be better off if their bosses were no longer with us. But they are not sure how to do it or even if they have the nerve to do it. So they begin brainstorming and exploring the options open to them.

If you liked The Hangover, you will probably like this movie. The style and subject matter are similar, especially the 3 guys go on a crazy adventure and get into all kinds of trouble. They even have the wild-card unstable character that can cause more harm than good at certain times. Of course here they each have a nemesis and that gives a nice balance to the story. They even recruit a fourth guy for advice on assassinations played by Jamie Foxx, who leaves you wishing that his part in the film was larger. Another strength of the film is a lot of good witty dialogue and smartly written jokes. The movie has a nice pace and good energy, but at times has you wondering exactly why the characters did what they did other than to advance the story.

Another similarity the movie shares with The Hangover is really good cinematography, better that usual for a comedy. At 98 minutes, I really wish the movie could have been longer. As is, the movie has a good script with actors that have the comic timing and delivery to make the most of the jokes. The end credits have bloopers and some deleted scenes.

You can see more of my reviews at : http://www.youdontknowjersey.com/category/moviereviews/