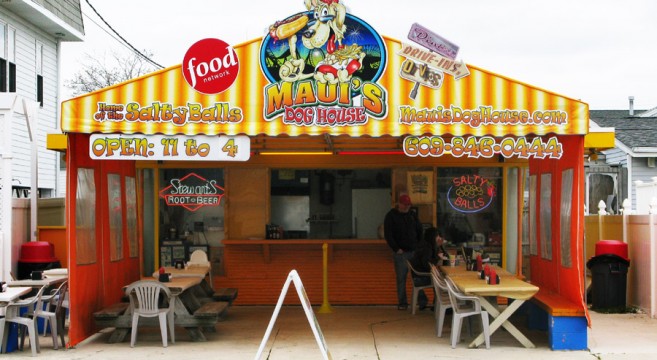 If you’ve seen any of the Food Network shows about hot dogs, you’ve probably seen Maui’s Dog House in North Wildwood. We’ve been a few times and it’s consistently excellent. We went a few months ago so we’re cheating a little with the hot dog tour’s timing.  But, really, this place is so fun and different that we had to include a write-up of our visit while we’re doing the official Tour.

Just looking at these pictures (that you’ll see if you scroll down) makes me want to make the trip to North Wildwood tonight.  This, coming after we’ve been eating hot dogs for a few weeks now.  They are just that good.

However, reading the open letter on their website we think we’ll stay away until summer is over.  They must be inundated with customers (good for them!) because they apologize for being awesome and making all their food cooked to order.  Seriously?  Who complains about awesome made-to-order food?  Apparently, they’ve had some internet critics.  But, lots of people want to criticize something that’s popular so hopefully the owners aren’t taking them TOO seriously.  Anyway, about the food… 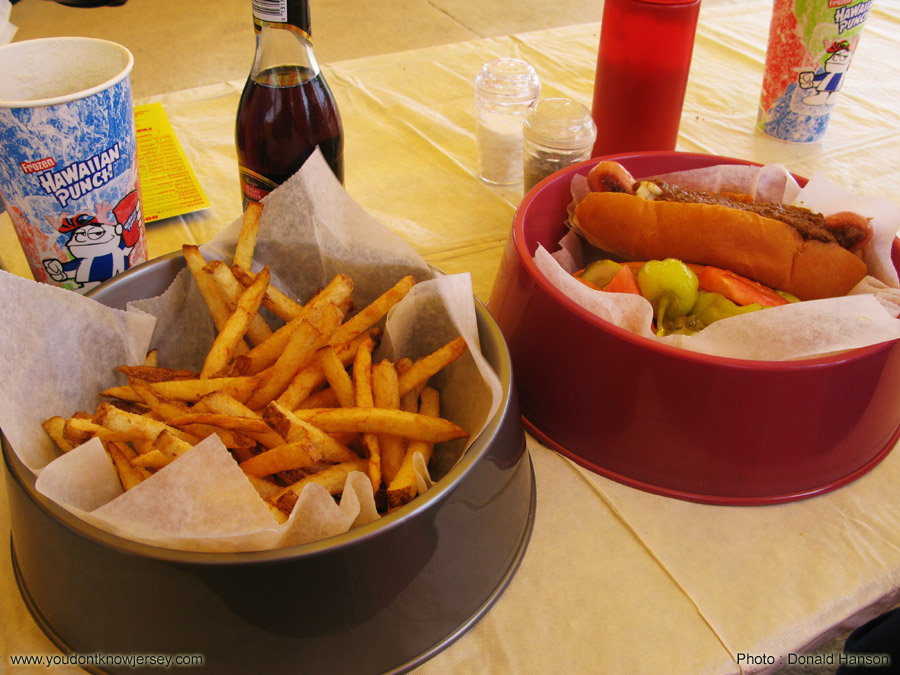 The first two dogs we tried on our last visit were the Dressed Horse Dog (spicy ground beef chili, raw onions and horseradish mustard toppings) and the Horsey in Chicago Dog (Horsey Mustard, Raw Onions, Pickles, Hot peppers & Tomatoes, Celery Salt – A.K.A. The Everything Cold Dog). We are BIG fans of the Horsey Mustard. The dogs are what Maui calls traditional German franks with a combination of beef, pork and veal. They are big, meaty and have a really nice snap. As you can also see, everything is served in dog bowls. That’s part of what makes Maui’s special. They put a funny spin on everything. 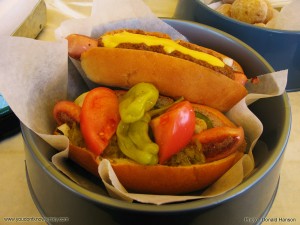 We also tried the Dressed Dog (ground beef sauce (that’s what they call it…  we call it really beefy chili), raw onions and spicy brown mustard) and the Chicago Dog (spicy mustard, raw onions, pickles, hot peppers, tomatoes and celery salt).   The classic all-the-way style dog that they call the Dressed Dog is my favorite.  It takes what you already know from the myriad other hot dog places and puts the special Maui spin on the toppings.  That ground beef sauce/chili is SO good.  Nice and meaty with just the right heat.  And, why have plain old mustard when you can have spicy brown mustard?  Yum!  The Chicago Dog was also delicious.  I picked a few of the larger veggies off just so I could fit it in my mouth.  But, if you have a giant mouth maybe you will be able to eat it without disassembling it. 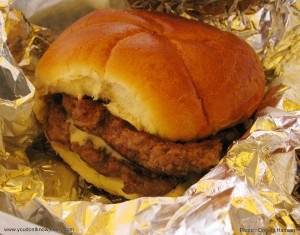 Just to be fair, we also tried a non-hotdog item.  We got the double cheeseburger which was as juicy and delicious as the picture shows. The meat was moist and well-seasoned and the bun was perfect for soaking up delicious drippings.  So, if you’ve got a non-hotdog person with you, rest assured there will be something else for them on the menu.  They also have good-looking shrimp items on the menu but only on certain days so make sure you check their website before you head out if you’re looking for those. 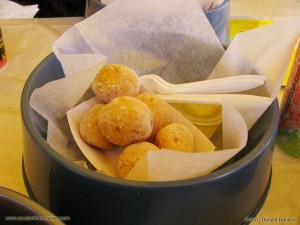 We would be remiss if we didn’t tell you about Maui’s Salty Balls.  They are like mini baked potatoes but they’re brined in a very salty, spiced bath.  When we tried them, we could each only eat a few because they were so salty.  Fortunately, we like salt.  However, we’ve read in other reviews that they probably aren’t usually THAT salty.  So, they’re definitely something fun and different to try. 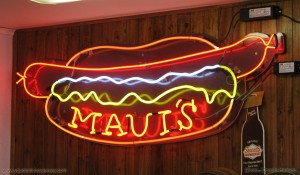 So, despite they’re probably being so busy that we’ll stay away in the summer, we highly recommend trying Maui’s Dog House in North Wildwood the next time you’re heading to the southern shore points.

Pin It
Previous post:
Things to do in Jersey – Car & Truck Shows – August 2011 Next Post:
What’s Fresh This Week at the Farmers’ Markets?