Where Are the Fault Lines in New Jersey?

Yesterday’s earthquake wasn’t focused in New Jersey but instead came up through the Mid-Atlantic from Virginia.  It got us thinking, though, about what Jersey has to offer as far as fault lines go.

The New Jersey Geological Survey website indicates that there are many fault lines in New Jersey but says that the major one is the Ramapo Fault which separates the Piedmont and Highlands Physiographic Provinces.  A recent article from WNYC shows a map of the Ramapo and its related fault lines. 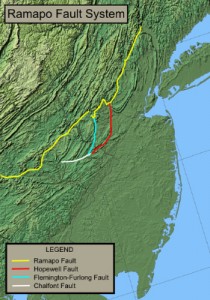 According to the NJGS, many minor earthquakes have been recorded in the Ramapo Fault Zone, a 10 to 20 mile wide area lying adjacent to, and west of, the actual fault but nothing life-threatening.  The Ramapo Fault’s risk was in the news in the 70’s and 80’s because of its proximity to the newly-built Indian Point, New York, Nuclear Power Generating Station. The fault line starts in Pennsylvania and crosses New Jersey through Hunterdon, Somerset, Morris, Passaic and Bergen counties. After it leaves NJ, it crosses the Hudson River right near Indian Point nuclear facility.

Even if there was a severe earthquake, generally speaking, quakes east of the Rocky Mountains (including New Jersey) do not break the ground surface. Fault lines seen on the surface in mountains and rocky areas today are evidence of ancient events.

Here is a chart of earthquakes on record that caused substantial damage in New Jersey. As you can see, they all happened a long time ago.

This chart shows the location of the Ramapo Fault System, the longest and one of the oldest systems of cracks in the earth’s crust in the Northeast. It also shows the location of all earthquakes of magnitude 2.5 or greater in New Jersey during the last 50 years. The circle in blue indicates the largest known Jersey quake. 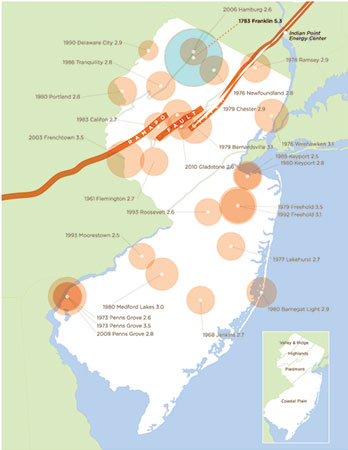 Alexander Gates is  a professor of geology and chair of the department of Earth and Environmental Sciences at Rutgers-Newark. He explains why our situation is different from California’s.
Although the northeast-trending Ramapo Fault neatly divides two of New Jersey’s four physiographic provinces, it does not form a so-called plate boundary, as does California’s infamous San Andreas Fault.
The Ramapo Fault sits on the North American Plate, which extends past the East Coast to the middle of the Atlantic, where it meets the Mid-Atlantic Ridge, an underwater mountain range in constant flux. The consequences of this intraplate setting are huge: First, as Gates points out, “The predictability of bigger earthquakes on…[such] settings is exceedingly poor, because they don’t occur very often.” Second, the intraplate setting makes it more difficult to link our earthquakes to a major cause or fault, as monitors in California can often do.
This second bit of uncertainty is especially troubling for some people, including some in the media who want a neat story. To get around it, they ignore the differences between plate settings and link all of New Jersey’s earthquakes, either directly or implicitly, to the Ramapo Fault. In effect, such people want the Ramapo Fault “to look like the San Andreas Fault,” says Gates. “They want to be able to point to one big fault that’s causing all of our earthquakes.”
Gates does not think that’s the case, and he has been working with colleagues for a number of years to prove it. “What we have found is that there are smaller faults that generally cut from east to west across the northeast-trending Ramapo Fault,” he explains. “These much smaller faults are all over the place, and they’re actually the ones that are the active faults in the area.”

For everything you ever wanted to know about earthquakes in New Jersey including what happens in case of an emergency check out this really long and in-depth article at New Jersey Monthly.