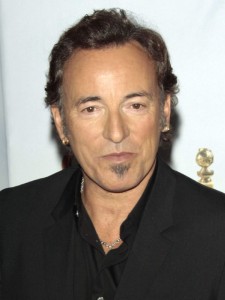 Springsteen was born in Long Branch, New Jersey, and spent his childhood and high school years in Freehold Borough. He lived on South Street in Freehold Borough and attended Freehold Borough High School. His father, Douglas Frederick Springsteen, was of Dutch and Irish ancestry and worked, among other vocations, as a bus driver. His mother, Adele Ann (née Zirilli), was a legal secretary and was of Italian ancestry. He has two younger sisters, Virginia and Pamela. Pamela had a brief film career, but left acting to pursue still photography full time; she took photos for the Human Touch and Lucky Town albums.

Raised a Roman Catholic, Springsteen attended the St. Rose of Lima Catholic school in Freehold Borough, where he was at odds with the nuns and rejected the strictures imposed upon him, even though some of his later music reflects a Catholic ethos and included a few rock-influenced, traditional Irish-Catholic hymns.

In ninth grade, he transferred to the public Freehold Regional High School, but did not fit in there, either. Former teachers have said he was a “loner, who wanted nothing more than to play his guitar.” He completed high school, but felt so uncomfortable that he skipped his own graduation ceremony. He briefly attended Ocean County College, but dropped out.

Springsteen had been inspired to take up music at the age of seven after seeing Elvis Presley on The Ed Sullivan Show. At 13, his mother bought him his first guitar for $18; later, she took out a loan to buy the 16-year-old Springsteen a $60 Kent guitar, as he later memorialized in his song “The Wish.”

In 1965, he went to the house of Tex and Marion Vinyard, who sponsored young bands in town. They helped him become lead guitarist and subsequently the lead singer of The Castiles. The Castiles recorded two original songs at a public recording studio in Brick Township and played a variety of venues, including Cafe Wha? in Greenwich Village. Marion Vinyard said that she believed the young Springsteen when he promised he would make it big.

Called for induction when he was 18, Springsteen failed his physical examination and did not serve in Vietnam. He had suffered a concussion in a motorcycle accident when he was 17, and this together with his “crazy” behaviour at induction and not taking the tests, was enough to get him a 4F.

In the late 1960s, Springsteen performed briefly in a power trio known as Earth, playing in clubs in New Jersey. Springsteen acquired the nickname “The Boss” during this period as when he played club gigs with a band he took on the task of collecting the band’s nightly pay and distributing it amongst his bandmates. Springsteen is reportedly not fond of this nickname, due to his dislike of bosses, but seems to have since given it a tacit acceptance. Previously he had the nickname “Doctor.”

From 1969 through early 1971, Springsteen performed with Steel Mill, which also featured Danny Federici, Vini Lopez, Vinnie Roslin and later Steve Van Zandt and Robbin Thompson. They went on to play the mid-Atlantic college circuit, and also briefly in California. During this time Springsteen also performed regularly at small clubs in Canton, Massachusetts, Richmond, Virginia, Asbury Park and along the Jersey Shore, quickly gathering a cult following. Other acts followed over the next two years, as Springsteen sought to shape a unique and genuine musical and lyrical style: Dr Zoom & the Sonic Boom (early–mid 1971), Sundance Blues Band (mid 1971), and The Bruce Springsteen Band (mid 1971–mid 1972). With the addition of pianist David Sancious, the core of what would later become the E Street Band was formed, with occasional temporary additions such as horn sections, “The Zoomettes” (a group of female backing vocalists for “Dr. Zoom”) and Southside Johnny Lyon on harmonica. Musical genres explored included blues, R&B, jazz, church music, early rock’n’roll, and soul. His prolific songwriting ability brought his skill to the attention of several people who were about to change his life: new managers Mike Appel and Jim Cretecos, and legendary Columbia Records talent scout John Hammond, who, under Appel’s pressure, auditioned Springsteen in May 1972.

Even after Springsteen gained international acclaim, his New Jersey roots showed through in his music, and he often praised “the great state of New Jersey” in his live shows. Drawing on his extensive local appeal, he routinely sold out consecutive nights in major New Jersey and Philadelphia venues. He also made many surprise appearances at The Stone Pony and other shore nightclubs over the years, becoming the foremost exponent of the Jersey Shore sound.

Springsteen signed a record deal with Columbia Records in 1972, with the help of John Hammond, who had signed Bob Dylan to the same label a decade earlier. Springsteen brought many of his New Jersey–based colleagues into the studio with him, thus forming the E Street Band (although it would not be formally named as such for several more years). His debut album, Greetings from Asbury Park, N.J., released in January 1973, established him as a critical favorite, though sales were slow. Because of Springsteen’s lyrical poeticism and folk rock–rooted music exemplified on tracks like “Blinded by the Light”, (which would later be a hit for Manfred Mann and go to number one, making it the only time Springsteen had a number one single as a songwriter), and “For You”, as well as the Columbia and Hammond connections, critics initially compared Springsteen to Bob Dylan.

In September 1973 his second album, The Wild, the Innocent & the E Street Shuffle, was released, again to critical acclaim but no commercial success. Springsteen’s songs became grander in form and scope, with the E Street Band providing a less folky, more R&B vibe and the lyrics often romanticized teenage street life. “4th of July, Asbury Park (Sandy)” and “Incident on 57th Street” would become fan favorites, and the long, rousing “Rosalita (Come Out Tonight)” continues to rank among Springsteen’s most beloved concert numbers.

Given an enormous budget in a last-ditch effort at a commercially viable record (to be called Born to Run), Springsteen became bogged down in the recording process while striving for a wall of sound production. But, fed by the release of an early mix of “Born to Run” to progressive rock radio, anticipation built toward the album’s release. All in all the album took more than 14 months to record, with six months alone spent on the song “Born To Run” During this time Springsteen battled with anger and frustration over the album, saying he heard “sounds in [his] head” that he could not explain to the others in the studio.

On August 13, 1975, Springsteen and the E Street Band began a five-night, 10-show stand at New York’s Bottom Line club. The engagement attracted major media attention, was broadcast live on WNEW-FM, and convinced many skeptics that Springsteen was for real. (Decades later, Rolling Stone magazine would name the stand as one of the 50 Moments That Changed Rock and Roll.) With the release of Born to Run on August 25, 1975, Springsteen finally found success. The album peaked at number 3 on the Billboard 200, and while there were no hit singles, “Born to Run” (Billboard #23), “Thunder Road”, “Tenth Avenue Freeze-Out” (Billboard #83), and “Jungleland” all received massive album-oriented rock airplay and remain perennial favorites on many classic rock stations. The songwriting and recording was more disciplined than before, while still maintaining an epic feel. With its panoramic imagery, thundering production and desperate optimism, Born to Run is considered by some fans to be among the best rock and roll albums of all time and Springsteen’s finest work. It established him as a sincere and dynamic rock and roll personality who spoke for and in the voice of a large part of the rock audience. To cap off the triumph, Springsteen appeared on the covers of both Time and Newsweek in the same week, on October 27 of that year. So great did the wave of publicity become that Springsteen eventually rebelled against it during his first venture overseas, tearing down promotional posters before a concert appearance in London.

And the rest is rock and roll history.