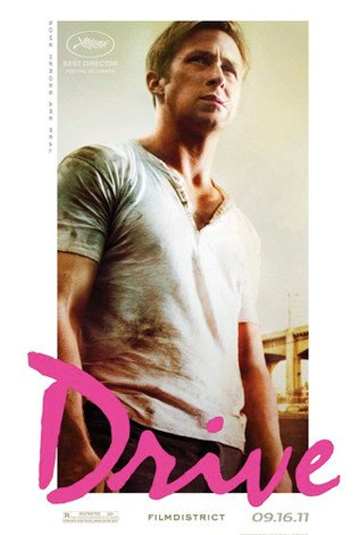 The movie Drive stars Ryan Gosling as a stunt car driver and sometimes getaway car for hire. He is pretty much a loner who keeps to himself, but as fate would have it, his life gets tangled up with a variety of mostly shady characters. Based on the trailer and commercials. you may think that this is just another action film. If you think that, you would be wrong.

Ryan Gosling is one of the best actors out there but he seemed to disappear recently.  He is back with a vengeance with 3 films in less than 3 months. He nails the lead role perfectly here and brings the audience into the movie through his emotions and first rate screen presence. This is no easy task considering the lack of dialog in many scenes. And he is supported by an excellent cast all around with standout performances particularly from Albert Brooks and Breaking Bad’s Bryan Cranston.

This movie has so much atmosphere, you dont just watch it, you feel it. And it has a wonderful and powerful soundtrack that enhances the changing tones and sets the mood for the semi-abstract structure of the film. This is the kind of soundtrack where whenever you hear a song from it, you will be reminded of this film. The cinematography is top notch as well and contributes to the feel of the movie with a strong artistic flair. Every shot in this movie is filled with excellent compostion, lighting, and energy. It is an amazing movie to look at.

This is a gritty story with characters’ lives in various degrees of tragedy and a lot of situations that have moral grey areas. The relationships between the characters take twists and turns that avoid cliches and are realistic and engrossing. There are no simple situations here. The circumstances these characters face have a real world complexity to them.

This movie is a true accomplishement, an action film made with artistic sensibilities. many of the scenes are mini masterpieces. For instance, there is an elevator scene that has more style, acting, emotion, intensity and creativity than some movies have in total. I can see how some people may find this movie to be a little boring if they can’t appreciate the atmosphere, style and storytelling with a certain lack of dialogue. For those who can appreciate it, this is a very unique and special movie. Go see the movie and then get the soundtrack, one of the best soundtracks of recent years.

You can read more of my movie reviews here

Pin It
Previous post:
Music – Shonen Knife – “Osaka Ramones, Tribute to the Ramones”- October 23 2011 – Sewell NJ Next Post:
New Jersey Among States Who Express Interest in Opting Out of No Child Left Behind