Get to Know Your NJ Symbols – Red Oak 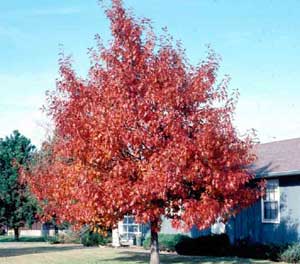 The red oak was authorized by a joint resolution signed by Governor Alfred E. Driscoll June 13, 1950. The state memorial tree is the dogwood, authorized by Assembly Concurrent Resolution No. 2 of 1951. Read more from shgresources.com after the break.

The red oak is a hardwood tree that you can recognize by its pointy-lobed leaves with prickly tips. It produces many acorns, an important food for the Native Americans of long ago. In autumn the leaves turn a vibrant red, adding bursts of color to our rural landscapes.

Northern red oak (Quercus rubra), also known as common red oak, eastern red oak, mountain red oak, and gray oak, is widespread in the East and grows on a variety of soils and topography, often forming pure stands. Moderate to fast growing, this tree is one of the more important lumber species of red oak and is an easily transplanted, popular shade tree with good form and dense foliage.

Fruit: Acorns are 3/4 to 1 inch long and nearly round. with less than 1/3 covered by the flat, saucerlike cup. The cap is flat and thick, covering about 1/4 of the acorn. Cup covered by reddish-brown, tightly overlapping scales. Matures in 2 years, ripens August to late October.

Twig: Quite stout, red-brown and glabrous. Terminal buds are multiple, quite large, ovoid, and covered with red-brown, mostly hairless scales.

Form: A medium-sized to large tree that develops a short trunk and round crown when open grown, straight with a clear bole when grown with competition.

Here’s the text of the actual proclamation for all you history buffs out there:

WHEREAS, The Senate and the General Assembly of this State, while sitting as the One Hundred and Seventy-fourth Legislature, did concur in Assembly Concurrent Resolution No. 12 resolving that

WHEREAS, In the preamble to said Concurrent Resolution it is declared that the red oak is a representative tree of New Jersey with beauty of structure, strength, dignity and long life, that it is most useful commercially and enjoys great freedom from disease, that it is adapted to our New Jersey soils and is compatible with all native shrubs and evergreens, permitting lawn and grass areas to be successfully grown under its canopy, and that the fall color of its foliage places it foremost in our natural landscape scene; and

WHEREAS, It is fitting that a proclamation should issue marking the aforesaid concurring action of the Senate and the General Assembly;

Given under my hand and the Great Seal of the State of New [SEAL] Jersey, this thirteenth day of June, in the year of Our Lord one thousand nine hundred and fifty, and in the Independence of the United States, the one hundred and Seventy-fourth.