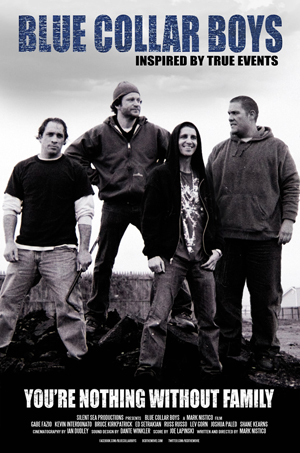 Old Bridge, NJ — NewFilmmakers Film Festival will premiere Silent Sea Productions’ “Blue Collar Boys”, an independent film shot in New Jersey, at the Anthology Film Archives on December 12 at 9:00 PM.  Tickets are $6.00 and will be sold at the door.   All who attend will receive a complimentary DVD of “The Making of Blue Collar Boys”.  The Anthology Film Archives is located at 32 2 nd Avenue @ 2nd Street, just one block north of the 2 nd Avenue stop on the F train.

“Blue Collar Boys” is the story of a family dealing with the struggles of a working class life.  Inspired by true events, the screenplay is a collage of real life experiences from the family, friends and co-workers of the writer/director, Mark Nistico.  The story is centered around Charlie Redkin (Red) a 27 year-old construction worker set on self improvement, as he struggles to provide for his family during their economic strife. Motivated by their financial hardship, Red and his lifelong friends fall into a lifestyle of hatred and thirst for revenge. Together, they are faced with a dilemma that will test their morals, faith, and ultimately their loyalties to each other. In a world that refuses to let the working man thrive, they want a better way.

“Blue Collar Boys” was written and directed by Old Bridge small business owner Mark Nistico (Silent Sea Productions) and was shot on location at over 20 Monmouth and Middlesex County businesses including Freehold based development company Sophia Homes, Old Bridge’s DeLuca Family Chiropractic, and Keyport dining favorite Trinity Restaurant.  The cast and filmmaker will be in attendance and a Q & A, along with a reception, will take place after the film screens.  To view the trailer for the movie or for more information on the film, please visit www.bcbthemovie.com