Movie Review – The Devil Inside 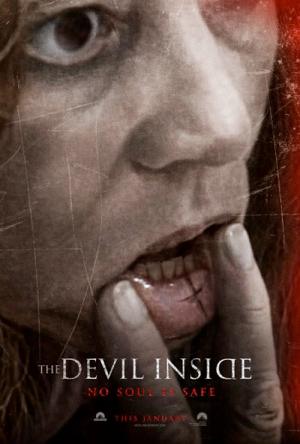 The Devil Inside is another movie about Exorcisms, and like The Last Exorcism it is filmed in the Blair Witch style. The story and acting is fairly effective. If anything, by the end it feels as though the movie should have done more.

The movie begins with a woman who murders 3 people during an attempted Exorcism from 1989. She is living in a mental hospital as the church has determined that she is not possessed but instead is a case of mental illness. This makes her off limits to Priests to try to perform another Exorcism. In search of answers and trying to get her mother back, her daughter hires a cameraman to document her journey as she goes to Italy to take classes to learn about Exorcisms. There she meets a couple of rogue priests that have taken on the responsibility of trying to help people that the church wont. The church also outlaws outlaws getting Exorcisms on video, but these two have no such problem. This is obviously of great help to the plot of the film.

This is a low-budget horror film which reportedly only cost $1 million dollars to make. It is an impressive feat and will undoubtedly make many times that back. It is a very modest movie with 5 main characters, a straightforward and simple story and some decent realistic acting. There are a couple of awkward plot turns. A couple of times a character starts doing something or saying something that is totally out of character and you kind of know what is happening but still it is not done very smoothly. The ending has a very abrupt and unfinished feel to it but if you have following the story closely it makes perfect sense.

All in all, it is not as well done as The Blair Witch Project or Paranormal Activity but it is a tidy well made little movie.