Comedy Central’s hilarious Sports Show with Norm MacDonald was unfortunately short-lived.  One of the best things to come from it was his “Oh, Google” segment.  Norm would type the beginning of a search into Google and see what suggestions it came up with.  The results were often funny and sometimes embarrassing.  For example, when typing in WNBA, Google would ask if you meant to ask about the NBA.  Why does Google hate women’s basketball?  These were the questions Norm wanted to get to the bottom of in his “Oh, Google” segments.  It gave us the idea to plug some questions about New Jersey into the old Googlizer and see what happens.  On to the results!

Smell?  Thanks a lot.  Smells like jealousy!  Maybe some small stretches along the turnpike but overall we smell no worse than anyone else.  We’ve driven all over this country and some states smell like cow manure for long stretches.  At least in Jersey, you can drive a few miles and the smell dissipates.  Some of these “manure states” last for a hundred miles.  If you drive a hundred miles in New Jersey, the range of aromas you’ll get will include ocean breezes, fresh pizza and mountain pines along with your swamp.

The second one doesn’t even make sense.  If you ask us it should read “why does new jersey not pump gas?” Maybe these are out of state people asking why we have people who pump gas for you?  Guess what, jealousy strikes again! You bet your butt we aren’t about to get out there in hail, wind and snow to pump that gas.  Why not give some people jobs and let them stand out there.  The other states who don’t have this law are chumps for standing out there just to get gas.

At least the third Google question about getting no respect seems somewhat hopeful. Perhaps people are curious why a state would constantly be the butt of a joke when so many people love living here.  The last one is similar in that we would also like to know why we have a bad reputation.

At least people aren’t indifferent about New Jersey. You either love us, or hate us.  But why the heck does worst come up first?  And, boring?  You have got to be kidding.  With 1,189 people per square mile (the most of any state!), New Jersey is going to be anything but boring.  In fact, we have to be one of the least boring states.  I don’t want to call any others states out but…oh why not.  Iowa, Nebraska, Dakota (doesn’t matter, pick one).  Tell me New Jersey is more boring than thousands of miles of flat treeless desolation and I’ll prove you wrong.

The peninsula question seems like a high school geography question to us.  At least it is an actual fact.  But, we’re still happy to at least see that the Best State question at least ranks in the top four options here.

The final Oh, Google! we’d like to break down is “How does New Jersey…”

How does New Jersey make money?  Hand over foot, apparently.  In 2011, we were third among the states with the most millionaires.  We were also number three in median income.  Looks like Google is leaning toward answering questions about what kind of industries we have. While we used to be the Garden State and still have quite a bit farming in the rural areas, New Jersey makes more money from its pharmaceutical, energy and scientific companies along with money from shipping goods in and out of one of the busiest ports in the world, the Newark-Elizabeth area.

Here’s the biggest question to come from these Oh, Google results.  How does New Jersey feel about Jersey Shore?  Let us preface this by saying that part of why we started this site was to combat the stereotypes of our state that this show so prominently displays.  (Even though, the Jersey Shore cast isn’t even from New Jersey, for the most part.)  Yes, the show is horrible and it makes the Jersey Shore look like it’s running rampant with drunk losers in their 20’s and 30’s and it’s just one big oozing cauldron of hair gel, suntan lotion and STDs.  But, the silver lining to all of the ugliness is that the show is actually bringing tourism dollars to the Jersey Shore.  New Jerseyans, New Yorkers and Pennsylvanians have always known how nice the Jersey Shore is for vacation.  Now, the whole country is getting to know us as a vacation spot and not just relying on the old stereotypes to color their view of New Jersey.

So, what does New Jersey think of Jersey Shore? Well, we both love it and hate it.  That’s also what we found out about New Jersey as a whole from our Googling.  Half the time, people are asking ‘why Jersey is so bad?’ and the other half of the time people are asking ‘why is New Jersey the best?’.  We have these questions, too.  That’s why we started You Don’t Know Jersey.  Because, you don’t.  And, we’re trying to.

Check out all of our Oh, Google! New Jersey edition results below: 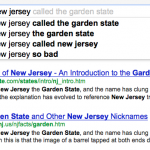 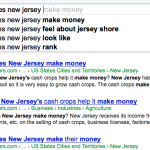 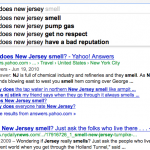