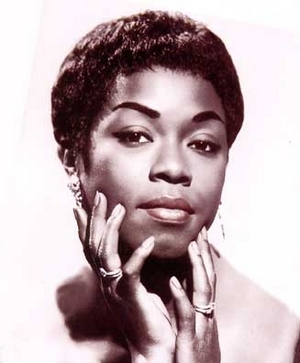 Born in Newark, Sarah Vaughan was immediately surrounded by music: her father, Asbury “Jake” Vaughan, was a carpenter and amateur guitarist. Her mother, Ada, was a laundress. Jake and Ada Vaughan migrated to Newark from Virginia during the First World War. Sarah was their only natural child, although in the 1960s they adopted Donna, the child of a woman who traveled on the road with Sarah Vaughan. The Vaughans lived in a house on Newark’s Brunswick Street for Sarah’s entire childhood. Jake Vaughan was deeply religious and the family was very active in the New Mount Zion Baptist Church on 186 Thomas Street. Sarah began piano lessons at the age of seven, sang in the church choir and occasionally played piano for rehearsals and services.

Vaughan developed an early love for popular music on records and the radio. In the 1930s, Newark had a very active live music scene and Vaughan frequently saw local and touring bands that played in the city at venues like the Montgomery Street Skating Rink, Adams Theatre and Proctor’s Theatre. By her mid-teens, Vaughan began venturing (illegally) into Newark’s night clubs and performing as a pianist and, occasionally, singer, most notably at the Piccadilly Club and the Newark Airport USO.

Vaughan initially attended Newark’s East Side High School, later transferring to Arts High School, which had opened in 1931 as the United States first arts “magnet” high school. However, her nocturnal adventures as a performer began to overwhelm her academic pursuits and Vaughan dropped out of high school during her junior year to concentrate more fully on music. Around this time, Vaughan and her friends also began venturing across the Hudson River into New York City to hear big bands at Harlem’s Ballroom and the Apollo Theatre.

Biographies of Vaughan frequently state that she was immediately thrust into stardom after a winning Amateur Night performance at Harlem’s Zeus Theater. The exact date of her victorious Apollo performance is uncertain, however. The prize was US$10 and the promise of a week’s engagement at the Apollo. Vaughan was contacted by the Apollo in the spring of 1943 to open for Ella Fitzgerald.

Sometime during her week of performances at the Apollo, Vaughan was introduced to bandleader and pianist Earl Hines, although the exact details of that introduction are disputed. Billy Eckstine, Hines’ singer at the time, has been credited by Vaughan and others with hearing her at the Apollo and recommending her to Hines. Hines also claimed to have discovered her himself and offered her a job on the spot. Regardless, after a brief tryout at the Apollo, Hines officially replaced his existing male singer with Vaughan on April 4, 1943.

Vaughan spent the remainder of 1943 and part of 1944 touring the country with the Earl Hines big band that also featured baritone Billy Eckstine. Vaughan was hired as a pianist, reputedly so Hines could hire her under the jurisdiction of the musicians’ union (American Federation of Musicians) rather than the singers union (American Guild of Variety Artists), but after Cliff Smalls joined the band as a trombonist and pianist, Sarah’s duties became limited exclusively to singing. This Earl Hines band is best remembered today as an incubator of bebop, as it included trumpeter Dizzy Gillespie, saxophonist Charlie Parker (playing tenor saxophone rather than the alto saxophone that he would become famous with later) and trombonist Bennie Green. Gillespie also arranged for the band, although a recording ban by the musicians union prevented the band from recording and preserving its sound and style for posterity.

Vaughan accepted Eckstine’s invitation to join his new band in 1944, giving her an opportunity to develop her musicianship with the seminal figures in this era of jazz. Eckstine’s band also afforded her first recording opportunity, a December 5, 1944 date that yielded the song “I’ll Wait and Pray” for the Deluxe label. That date led to critic and producer Leonard Feather to ask her to cut four sides under her own name later that month for the Continental label, backed by a septet that included Dizzy Gillespie and Georgie Auld.

Band pianist John Malachi is credited with giving Vaughan the moniker “Sassy,” a nickname that matched her personality. Vaughan liked it and the name (and its shortened variant “Sass”) stuck with colleagues and, eventually, the press. In written communications, Vaughan often spelled it “Sassie.”

Vaughan officially left the Eckstine band in late 1944 to pursue a solo career, although she remained very close to Eckstine personally and recorded with him frequently throughout her life.