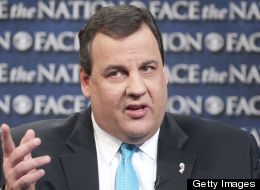 Governor Chris Christie was caught sleeping at a Bruce Springsteen concert on Tuesday night at Madison Square Garden by a fan who took a picture of him resting his head in his hand.

This may lead you to believe that Christie is not a fan of Bruce, but quite to the contrary he says that he has been to over 127 Bruce Springsteen concerts. Apparently, he was active earlier in the show when Bruce was talking about supporting food banks in New York and New Jersey, but ran out of steam during a performance of ‘Rocky Ground’.

Some fans that saw him sleeping tried to wake him up but to no avail. They did catch the attention of his security detail but that’s about it.

Christie says that his opposing political views has no affect on his being a fan of Springsteen.