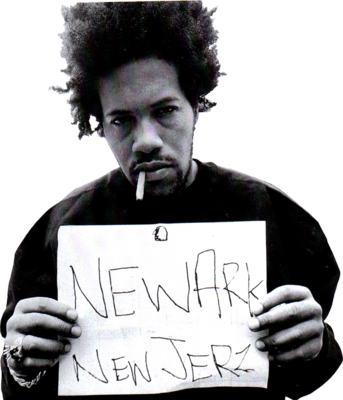 Born Reginald “Reggie” Noble in Newark, Redman got his name from when a little girl threw a snowball at his face when he was a kid and his cheeks swelled up.  He is an MC, rapper, DJ, record producer and actor. He came to fame in the early 1990s as an artist on the Def Jam label. He is also well known for his collaborations with Method Man, including their starring roles in films and sitcoms. He was a member of the Def Squad in the early 1990s. Redman is one-half of the rap duo Method Man & Redman and has been unofficially referred to as the “11th member” of the Wu-Tang Clan.

He went to Montclair State University while he struggled to build a career as an emcee. After 6 years of freestyles and mixtapes, Redman got his break with EPMD after rooming with Erick Sermon for 2 years. After this hook up Redman appeared on the EPMD classic ‘Hardcore’ from the 1991 album ‘Business as Usual.’

He was quickly signed up to Rush Associated Labels /Def Jam and also became part of the Hit Squad which consisted of Das EFX, EPMD and K-Solo. His debut single, ‘Blow Your Mind’ was released in late ’92, the track sampled the Gap bands ‘Outstanding’ and introduced the world to his spaced out brand of funk and his unique nasal flow while he rapped about nothing but love for the weed.

Also in late 1992 the album ‘Whut? Thee album’ was released, like its preceding single the set was 20 tracks long dripping in that deep muddy funk that was becoming Redman’s trademark sound. Produced primarily by Erick Sermon, Reggie also contributed with some co production that displayed yet again his spaced out style, the album played like a movie. The album spawned another 2 singles ‘Time 4 Sum Aksion’ and ‘Tonight’s the Night’ that used the hook from the Mary Jane Girls 70’s hit ‘All Night Long’ which he also sampled on ‘Can’t Wait’ from his second album, Dare iz a Darkside.

The rest is hip hop history.

[via Hip Hop Galaxy and Wikipedia]