It’s National Animal Cracker Day!  And, guess where Barnum’s Animal Crackers are made?  Right in the big Nabisco bakery in Fair Lawn! 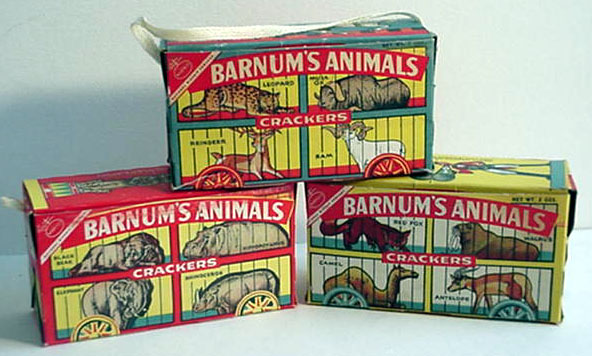 Can you name all 17 animals represented in the current box?

More than 40 million packages of Barnum’s Animal Crackers are sold each year, both in the United States and exported to 17 countries worldwide. The crackers are baked in a 300-foot (91 m) long traveling band oven. They are in the oven for about four minutes and are baked at the rate of 12,000 per minute. Fifteen thousand cartons and 300,000 crackers are produced in a single shift, using some thirty miles of string on the packages. This runs to nearly 8,000 miles (13,000 km) of string a year. Those bright circus boxes are produced in three colors – red, blue and yellow – with different variety of animals on each.