Like Giving AmEx Gift Cards as Gifts? You’ll Have to Order Ahead Online or Head to New York

I have out-of-state family members who have all agreed with me that we’d rather get each other gift cards that we can use wherever we want rather than trying to figure out what someone could use as a gift from hundreds of miles away. Well, thanks to New Jersey’s recently enacted rules on unclaimed property, American Express has pulled their gift cards out of the New Jersey.  And, more companies will probably be following suit. 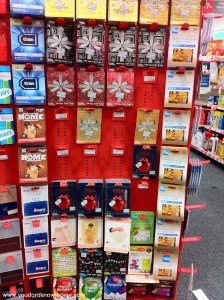 We found some cards still on the rack in our local CVS on Monday night.

I was able to find some AmEx cards tonight in our CVS, but an American Express spokesperson is quoted in the NorthJersey.com article below saying that the pull out started a few weeks ago and ended today.

The new regulation that card companies are so concerned about will require sellers of gift cards to record the ZIP code of everyone who buys a card, because the state thinks a revision to its unclaimed property laws allow it to claim the value of any unredeemed gift cards after two years. An injunction has been in place since the law became effective in 2010 because companies like AmEx sued the state saying that the zip code requirement was going to be too burdensome.

What do you think?  Should the state be able to get their hands on a gift card if we don’t use them right away?

Pin It
Previous post:
State of New Jersey to Switch Over to Self Serve Gas Stations Next Post:
Things to do in Jersey – April 6 7 8 2012