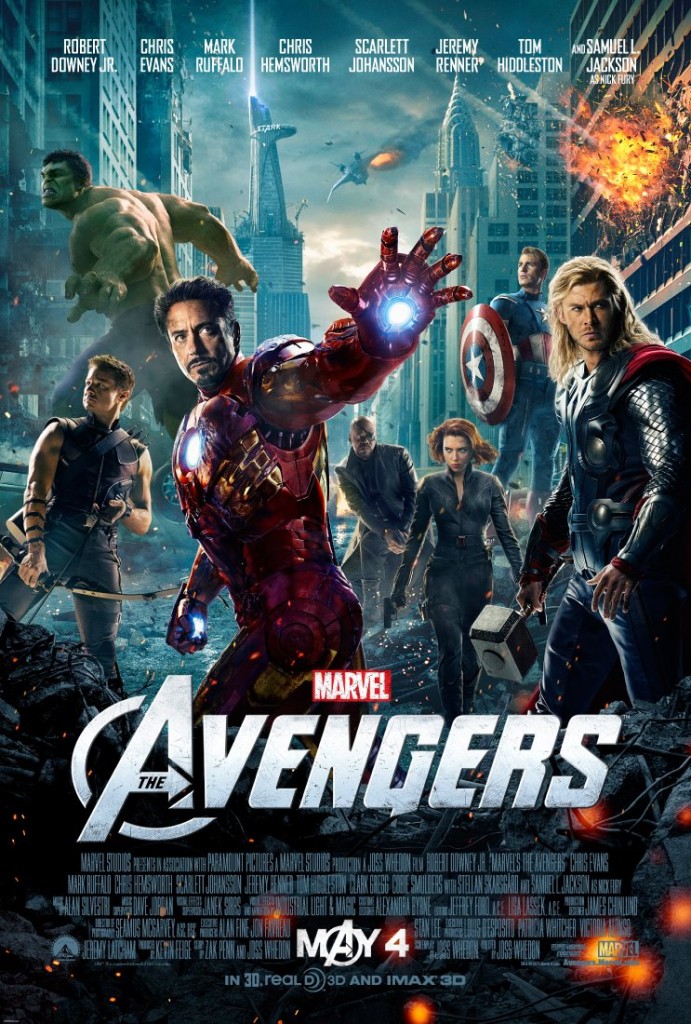 The Avengers is an unprecedented accomplishment in film making. Four unique characters, each with their own story, world and set of characters began separate franchises but subtle links caused their paths to meet on a grand scale. Think about all of the things that could have gone wrong. The first Iron Man could have flopped. But once it was a success, the Hulk, Thor and Captain America movies as well as the Iron Man sequel had to work for them to get here. From 2008 to 2012 this idea could easily have run out of steam for a variety of reasons. Somehow they made it all work and now we have The Avengers.

Given that each character has their own distinct personality and tone, the tricky thing here is to execute them all correctly without having them take anything away from each other. You have the witty, sarcastic, reckless but intelligent and insightful Iron Man, the patriotic and old fashioned hero Captain America, the melodramatic and majestic God, Thor and the split personality Bruce Banner trying to keep a lid on his alter ego, the Hulk.

I wasn’t sure that they could pull it off but after some establishing scenes for each character, the film stays faithful to each character and uses their differences to create conflict and dynamic relationships between them. It is kind of surreal to see the would-be leads of separate movies all co-existing in one.

Nick Fury and S.H.I.E.L.D. are keeping tabs as usual on the danger at large in the world and are faced with a scenario that is too much for them too handle. Fury resurrects The Avengers Initiative, an idea of his that was formerly scrapped. The idea being to bring together people with extraordinary powers and skills as a team, the problem being their willingness to work together and ability to get along.

Director, co-writer and screen writer Joss Whedon masterfully brings us a story that doesn’t shortchange any of the characters and is loaded with well done action scenes and battles as well as character developing dialogue and story. It’s always nice when the non action scenes are interesting and have a great energy and that is a testament to the dialogue and the acting.

My favorite thing he does however, is mixing tones perfectly. There is some well done humor in this film but not at the expense of the drama and danger. The movie mixes humor, tragedy, excitement, drama and inspiration – many times within the same scene just seconds apart and they work perfectly together. Avengers is a thrilling experience with excellent special effects that were absolutely necessary to bring this set of characters together. There is no way that this film could have been made say 15 or 20 years ago.

Another true accomplishment is Scarlett Johansson’s Black Widow. Here is a character that doesn’t have the same level of powers and abilities of some of the other characters and it seems like she would be out of her league in some of these situations. You wonder how her character can be relevant. Not only is she vitally important to the team in acquiring important information at pivotal points in the film, but she can mix it up with the best of them as a result of her skill and experience. Any preconceptions you may have that she wouldn’t be able to stand side by side with the others in the heat of battle will be erased. And in many cases she is the backbone of the team.

In Superhero movies, the Villain is very important and Tom Hiddleston continues his wicked portrayal of Loki from Thor into The Avengers. Arrogant, manipulative and having so much fun you love to hate him, he is an entertaining and dangerous villain.

The heart of the movie though is Clark Gregg as Agent Coulson. He first approached Tony Stark in the first Iron Man movie and has been in all of the Avengers lead-up movies. In this film, you learn more about his character and his personality becomes fully realized. In addition to being a capable agent, he is the everyman, the nerd, the character that the audience that people can most relate to. He believes in Superheroes and justice and idolizes Captain America. He has been so good in these movies and it’s nice to see him have more to do here.

All told this movie delivers everything it promises and more. At the end of the movie, there is a scene during the credits AND after the credits so stay to the end.

Click Here to read more of my Movie Reviews