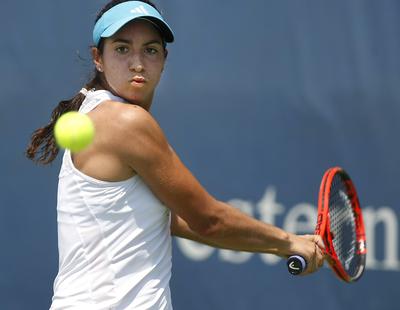 Christina McHale was born in Teaneck. Her family lived in Hong Kong from the time she was three until she was eight, and she speaks a degree of Mandarin Chinese. In 2000, the McHale family moved back to Englewood Cliffs where they still live. In June 2006, she graduated from Upper School of the Englewood Cliffs Public Schools as the eighth-grade valedictorian. At the age of 15, she left her home to train at the USTA Training Center headquarters in Boca Raton, Florida. She was homeschooled through Kaplan Online High School since moving.

Christina currently trains at the USTA Training Center in Carson, California. McHale played her first Major tennis event at the 2009 Australian Open. She also entered the 2009 US Open, where she won her first career Grand Slam and WTA match by defeating Polona Hercog in straight sets. However, in the second round she lost to Maria Sharapova.

In the first round of the 2011 US Open, she earned a three-set victory over Aleksandra Wozniak. She went on to beat eighth seed Marion Bartoli in straight sets.

McHale kicked off her 2012 season with a straight sets win over Alexandra Dulgheru at the 2012 ASB Classic in Auckland. At the 2012 Australian Open, she beat Lucie Šafářová in the first round and Marina Erakovic in the second, only to be defeated in the third round by Jelena Janković. She won both of her Fed Cup matches against Belarus in February, beating Anastasiya Yakimova and Darya Kustova. McHale then traveled to Doha, where she recorded wins over Chanelle Scheepers, Shuai Peng, and Shahar Peer, before falling to Agnieszka Radwańska in the quarterfinals of the 2012 Qatar Total Open.

Her game seems like it’s on the upward curve so we’re very excited about her chances in the 2012 Olympics!

We can see Christina begin playing on July 28th and the medal rounds are on August 4th and 5th.