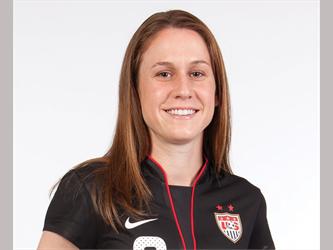 Heather Ann O’Reilly is proud to call New Brunswick her hometown and is also known by her initials HAO. She’s already a two-time Olympic Gold medalist! She is a midfielder currently playing for the Boston Breakers of Women’s Premier Soccer League Elite.

O’Reilly was Soccer America’s number one college recruit in the country.

She attended the University of North Carolina where she played forward for the North Carolina Tar Heels women’s soccer program from 2003 through 2006. She appeared 97 times for the Tar Heels, scoring 59 goals and assisting on 49 others. She led her team to national championships in 2003 and 2006. In her senior year ESPN the Magazine named her the All-American Player of the Year and was awarded the NCAA’s Today’s Top VIII Award following her senior year. Her #20 jersey was retired by the program, joining luminaries such as April Heinrichs, Lorrie Fair, Tisha Venturini, Kristine Lilly, Mia Hamm and 13 others.

Check out her cool website here before cheering her and the rest of US Women’s Soccer in London!

We can watch women’s soccer beginning July 25th and the medal games are on August 9th on NBC.