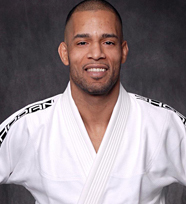 Cutting Edge Brazilian Jiu-Jitsu Academy recently held a free 2-hour Women’s Self-Defense Seminar at their studio in Harrison. I had the pleasure of taking part in this class and I can tell you first hand it was an empowering experience. It was a successful event with a turnout of about 30 women, most of them in their 20s and 30s. Professor Josef Manuel did a fantastic job with the help of some of his students.

Not only did they teach hands on techniques, but they touched upon the psychological aspects of an attack as well. My favorite part of the class was getting to toss around guys who are trained in martial arts! We learned how to use balance and leverage to topple an attacker. We ran through several drills and the workout has left me sore days later!

After the seminar, I had a chance to sit down with Professor Manuel to interview him about his career and the studio. Professor Manuel was born and raised in Newark. He was bullied as a child, but his parents wouldn’t allow him to take martial arts. So when he got older and wanted to get into shape, he looked into Brazilian Jiu-Jitsu. What started out as a fitness program, turned into an obsession and led him to start competing in events. After competing for a few years and drawing a following, he decided to open the studio. Aside from teaching at his studio, he also trains military personnel for combat.

Professor Manuel has won many silver and gold medals in several martial arts competitions worldwide, but when asked what his greatest achievement was he impressed me with humbleness. He told me a story of how a mother came to him at the studio and asked if he could train her special needs son.

The boy had brain surgery leaving him with a large scar on his head and some impediments with motor skills. He was constantly picked on by the other children for this. Professor Manual trained him and was beaming with pride when he told me that the boy was on par with all his other students. He gave this child confidence and helped him overcome his handicaps.

Cutting Edge is located at 210 Harrison Avenue in Harrison, NJ. They offer programs for mixed martial arts, youth mixed martial arts, Brazilian Jiu-Jitsu, Submission Grappling/No-Gi and Boxing/Kickboxing. They are planning a 6 week self-defense program in the fall for $120 which will teach the most common positions that females are attacked and how to defend against them. If you are interested in any of their programs, you can visit their website for more information: http://www.cuttingedgebjj.com.