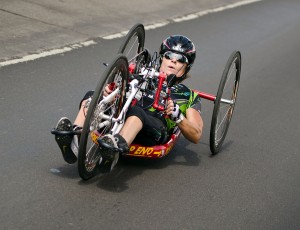 Monica was born in Massapequa, New York, but was raised in Ridgewood so we are calling her our own for this Paralympics.

Monica’s website has such a nice biography that we’ve republished parts of it here (focusing on the NJ and Paralympics parts):

Before she was paralyzed in a skiing accident, she played lots of sports while growing up in Ridgewood as the youngest of eight children. After high school, Monica moved to Santa Cruz, CA where she learned new sports and spent many weekends skiing in the Sierras. In 1992, Bascio went skiing with some friends near Lake Tahoe and crashed while navigating a small jump. The accident exploded her 12th thoracic vertebra, severing her spinal cord and resulting in complete paralysis from the waste down.

After her inpatient rehabilitation back in New Jersey at the Kessler Medical Center in East Orange, Bascio returned to Santa Cruz to rebuild her life and re-learn to perform here daily activities from a wheelchair. Monica’s confident and positive personality rendered her disability a mere “blip on the radar” as she set about to meet new goals, including obtaining her degree as an Occupational Therapist from San Jose State University.  In 1997, Bascio was preparing for her final exam to obtain her Occupational Therapy certification and was also looking for a way to get in shape and exercise outdoors. Her boyfriend — a former bike racer — did some research and purchased a handcycle for Bascio. At that time, handcycles were relatively new but the designs were rapidly changing and it was a perfect way for Monica to train regularly and improve her fitness and health.

The inaugural handcycling National Championship was announced the following year, and Bascio took part in the events — which were held as part of an existing USA Cycling race in Duluth, MN — and managed to finish 2nd in both the time trial and road race events. She made the team for the IPC World Cycling Championships in Colorado Springs that Fall, but could only participate in the time trial as her OT exam conflicted with the road race date. She finished last among the women, but it was enough to inspire Bascio to train harder and develop herself in to a racing cyclist.

Over the next five years, Monica became the #1 ranked handcyclist in the world and won more 30 races, including a world time trial title in 2002, multiple U.S. national titles, and the toughest race on earth: The 267-mile Sadler’s Alaska Challenge, which she won five times.

Handcycling made its first appearance at the Paralympic Games at the 2004 games in Athens, Greece. Although handcycling was indeed included, there would be no race for the women, which was a huge disappointment for Monica who was the top woman in the world at that time.

When it was announced that there would indeed be a women’s handcycling event at the Paralympic Games in Beijing later that year, Monica was recovering from a broken leg she sustained while sit skiing, which is another sport in which she’s made the Paralympics! Although the leg was technically healed by the time of the Paralympic Cycling Trials in June, Monica did not have enough training hours under her belt to be competitive. She raced and performed well, but — as expected — her pace was no where near the standard needed to make the team.

Bascio contemplated retirement altogether at the end of 2010, but a change in the governance of Paralympic Cycling got her attention: The UCI – the governing body of Professional Cycling, including the Tour de France – took over management of Paralympic Cycling. This meant that Paralympic cycling would truly become integrated and therefore become a bigger, better, and more organized platform for athletes with disabilities. The UCI immediately implemented a revised classification system in order to level the playing field among the competitors. The new system broke down the handcycling athletes in to four categories based on functional ability. Monica would now be classed as an H3 racer, and would race against athletes with a similar level of function and ability.

With a new-found inspiration for cycling, Monica called her long-time sponsor, Invacare Top End, and ordered a new, state-of-the-art handcycle and began training in the Fall of 2010. By the time the snow began to melt in Colorado in the Spring of 2011, Bascio had put in a lot of hours on the bike and optimized her position to match that of the women she would be racing against during the upcoming season.

She’s trained and ready to go in London.  Women’s cycling starts on September 5th and concludes on the 8th.

Monica’s website has more on her life story and all of her big sporting accomplishments, too.