We had the pleasure of meeting up with the Alexander Hamilton Awareness Society recently at the Great Falls in Paterson.  Our newest National Park! We went to hear about Alexander Hamilton’s greatest New Jersey accomplishment, the founding of Paterson!

We met the new Superintendent of Paterson Great Falls National Historical Park, Darren Boch, who you can see pictured on the right with AHA Society Founder, Rand Scholet: 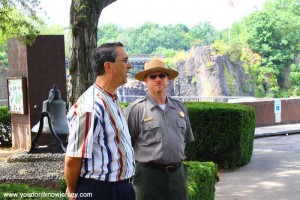 On March 30, 2009, President Barack Obama signed the Paterson Great Falls National Historical Park Act as part of the Omnibus Public Lands Management Act. On November 7, 2011, Secretary of the Interior Ken Salazar and National Park Service Director Jon Jarvis designated the site as America’s 397th National Park. Home to one of the nation’s largest waterfalls, Paterson’s Great Falls was harnessed to power new industries and played a key role in shaping the American Industrial Revolution and building the U.S. economy. The National Park and its Superintendent just got their first employee, too.  Things are really moving down there!  Her name is Ilyse Goldman and she’s from Fairlawn. 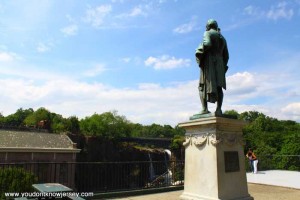 We’d seen the statue before at the Great Falls, of course, but we didn’t really understand why he was there.  It turned out to be a really interesting story.  President George Washington had lots of advisors back when our country was busy being formed.  Two major players in that advice were Alexander Hamilton and Thomas Jefferson.  Jefferson thought that we could make deals with European countries for manufactured goods that we didn’t make and needed desperately.  Hamilton disagreed entirely and knew that we’d never become a world leading country if we relied on other countries for all our goods.  Luckily, for us, Washington agreed with Hamilton in the end and decided that as a new country they should work on setting up manufacturing here at home.

Hamilton and Washington set out looking for  a place to get started and settled on New Jersey as the place to start.  At that point in the country’s short history, New York and Philadelphia were the two most important cities in the United States.  So, New Jersey made sense.  They chose three sites and finally settled on Paterson after seeing the Great Falls (then called the Totowa Falls) and realizing how much power could be generated for mills and factories from that water. Once Alexander Hamilton became Secretary of the Treasury, he wrote and delivered to Congress the Report on Manufactures and suggested Paterson as the place to start.   New Jersey soon passed legislation creating the The Society for Establishing Useful Manufactures (S.U.M.) and Hamilton was the chief advisor and most vocal supporter of the venture.  If you look closely at the buildings around the Great Falls, you’ll even see S.U.M. around.

Junior volunteers from the New Jersey Community Development Corporation gave us a tour of the whole area around the falls, the raceways and the buildings in the National Park grounds.  Sometimes having to yell over the roaring falls, these girls really knew their stuff!  They can be seen here with some of the tour members: 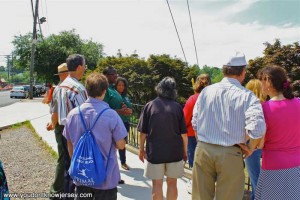 One of the most impressive things we saw on the tour was what the Great Falls looked like without much water.  It was fascinating to see so much of the underlying rock formations under what’s usually tons of water. 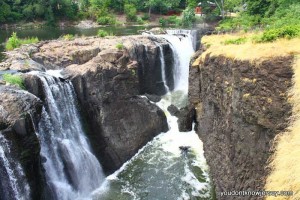 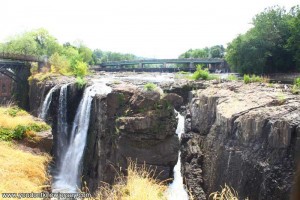 Along with the Great Falls tour, we were also treated to visiting the Ivanhoe Artists Mosaic in the Ivanhoe Wheelhouse.  We’d seen signs for this before but had never been able to stop in.  What a treat! 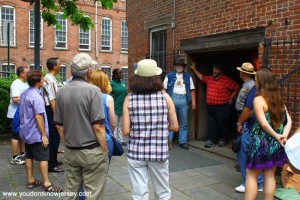 We learned about the Ivanhoe Wheelhouse and its history along with how the artists came to show their work here.  We’ll be going back to get more detailed information for a whole article on them soon.  So, stay tuned for more on the Ivanhoe Artists Mosaic.

If you’ve ever wondered why Alexander Hamilton is on the ten dollar bill and why he was shot by Aaron Burr in Weehawken, we highly recommend you look into attending more events with the Alexander Hamilton Awareness Society here in New Jersey.  Of course, they also have events in New York, too.  They’re a great group of people and we learned more than we even imagined about the New Jersey connections with Alexander Hamilton.