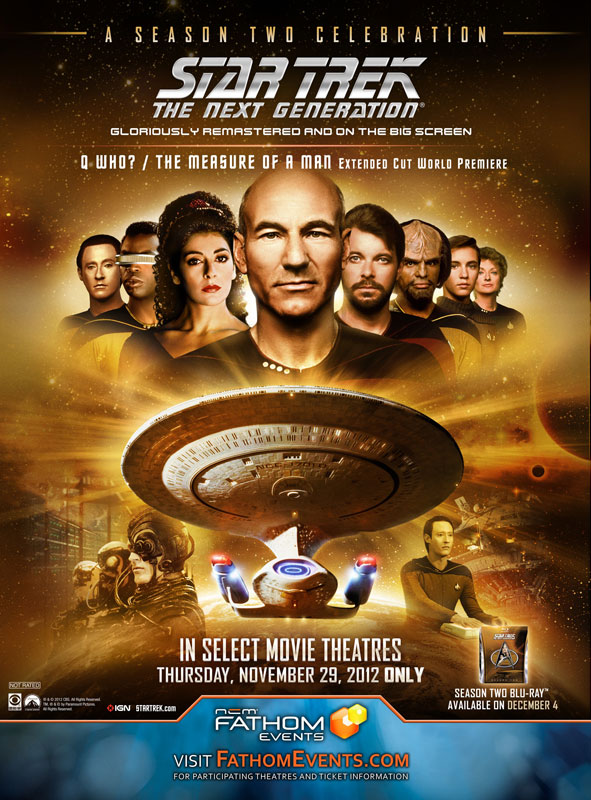 Details of the event:

Star Trek: The Next Generation – A Celebration of Season 2

To celebrate Season 2 of the iconic series Star Trek: The Next Generation, NCM Fathom Events and CBS Home Entertainment are coming together for a special one night big screen event.

This not to be missed movie theatre event will feature two of the most popular Next Generation episodes, Q Who? and The Measure of a Man which will include, for the very first time, about 13 minutes of never before seen additional content.

Set in the 24th century, The Next Generation was created by Gene Roddenberry over 20 years after the original Star Trek series. The Next Generation became the longest running series of the Star Trek franchise, consisting of 178 episodes over 7 seasons. Star Trek: The Next Generation – A Celebration of Season 2 is the first opportunity to see a transcendent digital presentation and the world premiere of the extended cut of The Measure of a Man in select movie theaters nationwide on Thursday, November 29 at 7:00 PM.

Only One Night. This will be a must see event for any STAR TREK fan and a truly unique experience with exclusive, never before seen footage.

For a list of participating theaters and to purchase tickets, check out http://bit.ly/StarTrekNYC

To win a pair of tickets on a first come, first served basis, simply send us an e-mail at contests@youdontknowjersey.com stating your name, address to mail the tickets to and e-mail address.

Winners will receive their tickets by Wednesday.

We will notify the winners by Wednesday, November 28th, 2012.