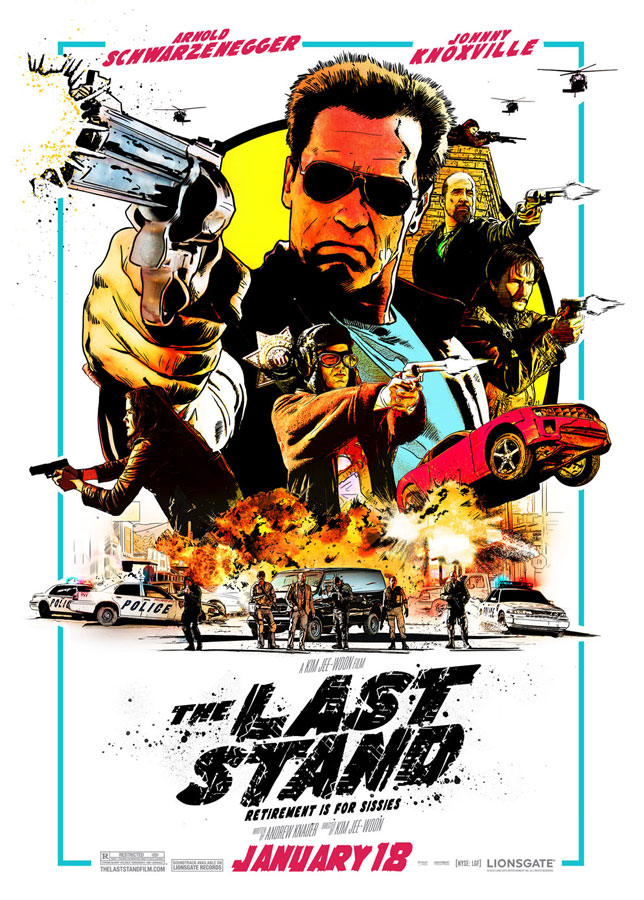 The Last Stand is Arnold Schwarzenegger’s first leading role since he became governor of California. He’s back, playing Sheriff Ray Owens. His town, Summerton Junction is a small, western town near the Mexican border. It’s a quiet little town where nothing much happens… until now.

A big city criminal, cartel boss Gabriel Cortez (Eduardo Noriega) is about to make his escape to Mexico and he will be passing right through Arnold’s town to do it. Forest Whitaker plays Agent John Bannister, the FBI Agent heading up the manhunt after they lose him during a criminal transport. Ray’s police force consists of himself and just a couple other officers. The always funny, likable and entertaining Luis Guzman plays Mike Figuerola. Sarah Torrance (Jamie Alexander) is a female cop with an trouble making ex-boyfriend in their jail.

Lewis Dinkum (Johnny Knoxville) is a gun obsessed, wanna-be cop who winds up getting his wish as they are shorthanded to take on the Cortez and his small army of henchmen. He brings a good sense of humor and weirdness to the proceedings. Harry Dean Stanton shows top in a small role as a farm owner that is in the villain’s way. Peter Stormare plays Burell, the leader of the aforementioned criminal’s little army and has the angry, aggressive and flamboyant bad guy role.

This movie is very well made with great action scenes and decent acting and characters. The story is simple and does a good job of putting the small town police force on a collision course with the bug city case. The film has a good pace between the efforts of both law enforcement agencies. The movie has a good sense of humor about itself and most of the comedy works, but there is one scene in a diner that has a relatively weak punchline. Also, the storyline and relationship about the female cop and her ex is weak and not necessary.

What really works well here is the character that Schwarzenegger plays. The sheriff role fits perfectly and it doesn’t feel at all like he is trying to play the same kind of characters he played 10-15 years ago before his political career kept him away from films for awhile. He fits into the role comfortably. It’s a very good role, a well made movie and a strong film for him to make a comeback with.