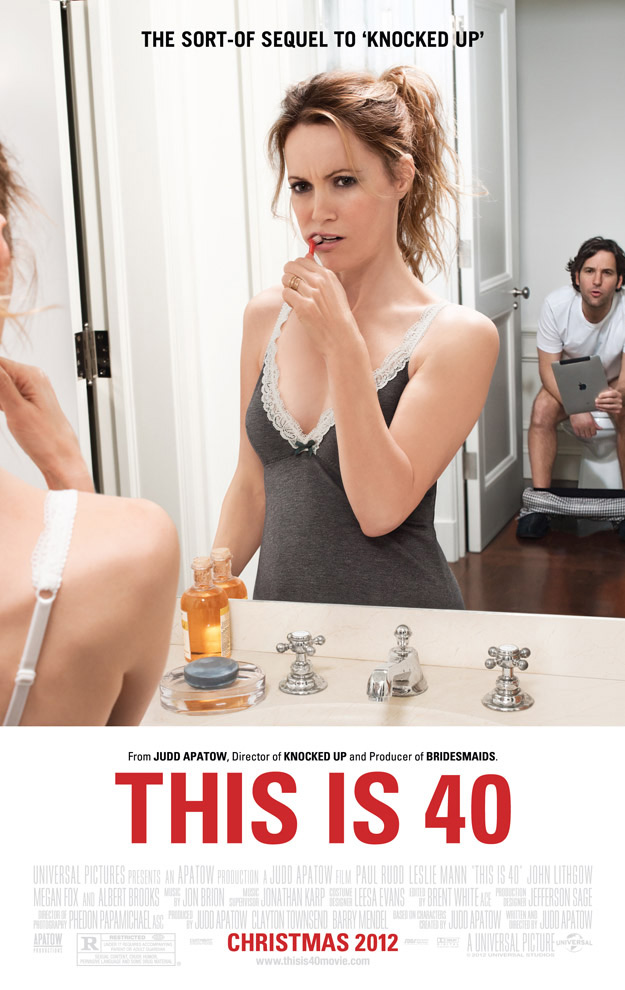 Like the poster says, ‘This is 40’ is a sort-of sequel to 2007’s Knocked Up. The always great Paul Rudd and Leslie Mann reprise their roles from Knocked up as the leads of this film. Their daughters, played by Leslie Mann and Director Judd Apatow’s own real life daughters are back too, as well as Jason Segel and Charlyne Yi in their supporting roles from the previous movie.

As the title suggests, the film is about the two lead characters turning 40 and taking a look at their lives. There is a scene where a 90 year old woman says she turned 40 and then she blinked and she was 90. But what starts as a midlife crisis quickly turns into a flat out mess. Don’t get me wrong. I was happy that it wasn’t the cliched ‘live life’ story I was expecting. And the movie is a fairly realistic portrayal of the stresses of dealing with crazy relatives, bad relationships and a failing business.

I give the movie credit for daring to be serious about the topic it is tackling. The problem is that the characters don’t seem to have any clear story arcs and the film has no discernible message except that living is difficult. You watch the characters come to different conclusions and strategies without understanding why. Plus, there are a lot of dramatic scenes that are stressful and exhausting as a result of the story lines.

If you are planning on seeing this movie, you should understand that even though it is marketed as a comedy. it is a drama with some comedic dialogue and situations. But it is a drama at heart, not a comedy. The tone is similar to the Adam Sandler film ‘Funny People’ except that this movie is not as funny.

This movie has plenty of talented actors and some smart witty writing and there are some very funny scenes and dialogue. However the bulk of the film is not that funny and actually borderline stressful.