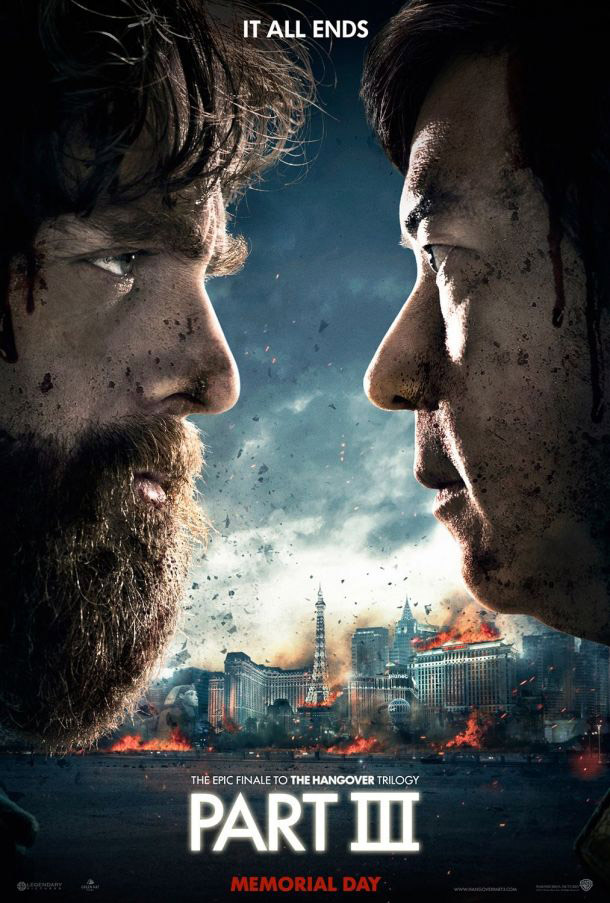 Two years ago, when The Hangover Part II came out, it was a huge disappointment because it was exactly the same story as the first one just with different backdrops. It was a carbon copy and a complete waste of time. The irony is that one of the reasons that the first film was successful was the unfolding of the mystery of what had happened the night before. As Part II went along everything was obvious as you could see they were following the formula of the first one. In any sequel you want the same characters and tone but you want to see them have a new adventure. That being said, you can imagine the huge sense of relief that came over me as I realized that the new installment, The Hangover Part III was not going to be another clone and was actually a brand new story.

That doesn’t mean however that this movie is spectacular my any means, but it’s what the second movie should have been. Phil(Bradley Cooper), Stu(Ed Helms) and Alan(Zach Galifianakis) are back as the ‘Wolfpack’ but this time instead of pre-wedding parties, this story begins with Alan’s family and friends staging an intervention. As a result, this movie is more about Alan than the other guys and that is a good thing. Ken Jeong returns again as Mr. Chow, turning in a great performance. We also get some new faces including John Goodman as a gangster and Melissa McCarthy as Alan’s love interest. And as usual the movie finds a way to relegate Doug(Justin Bartha) to supporting status.

The tone of this film is like the first two with a mixture of outrageous humor and dark and violent undertones. The story is the most meaningful of all 3 movies in the mission of trying to help Alan and the evolution and story arc of his character. As in the first film, there is some real pathos here and subtleties that attentive viewers can appreciate. The Hangover movies are more than just comedy and some of the better moments in the first and third movie have been dramatic scenes. A lot of people are probably going to avoid this film thinking it will simply be a rehash of the first two and you really can’t blame them after Part II. That would be a mistake. If you are a fan of the original you should definitely see this one but skip Part II unless you have already seen it.

The Hangover Part III is what the Part II should have been and the series could have continued on solid footing for a third movie and possibly more. Instead we really only got 2 Hangover films since Part II was no different from the first.