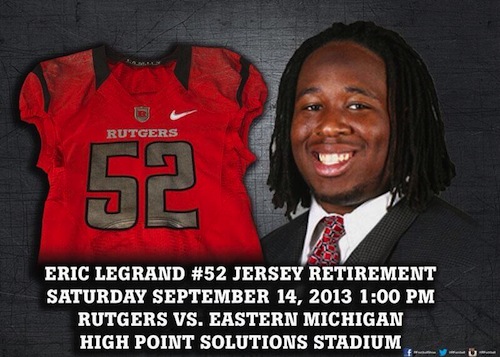 In a class move Rutgers football coach Kyle Flood announced that the football program will retire Eric LeGrand’s #52 jersey. This is the first number to be retired in the program’s 144 year history. The event will take place at High Point Solutions Stadium in Piscataway on Saturday September 12th when the Scarlet Knights take on the Eagles of Eastern Michigan.

LeGrand suffered a spinal cord injury and was paralyzzed back in October 2010 when making a tackle on a kick off return against Army.

No one will wear #52 ever again. For now. That is because there is a twist.  The number will be “unretired” once LeGrand walks again. If you know anything about this young man you know that this is a “when it happens” and not an “if it happens”. His determination is amazing.

“I’ve been around Eric enough that he makes this statement quite often — that he’s going to go back to the (MetLife) stadium where it happened and he’s going to get up off that spot and he’s going to walk off the field,” Flood said Tuesday at the first American Athletic Conference media day in Newport, R.I. “I told him, ‘I know you’re going to do that, too, and when you do it, I’m going to unretire your jersey for you.'”

LeGrande told ScarletReport.com, “I put my life into this sport. I still treat it with passion after my injury. For someone to wear that number someday, I hope it really means a lot to that person when I do walk again.”

Many fans are looking forward to that day.