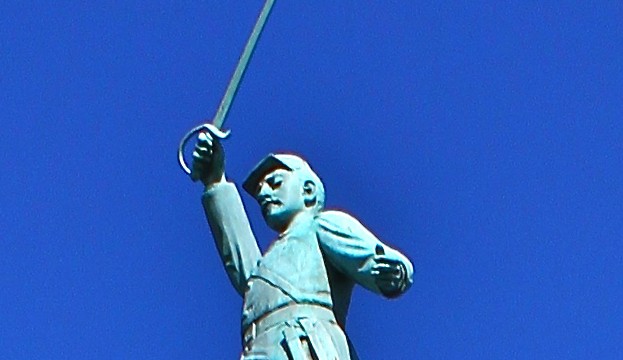 Sometimes when you’re away from home you see something from New Jersey and feel a little twinge of pride.  Here’s something to be especially proud of.  The State of New Jersey monument honoring the New Jersey soldiers who fought at Antietam. New Jersey sent five regiments of infantry and one battery of artillery to Maryland and fought in the bloodiest single-day battle in American history. Four of the regiments served together as the New Jersey Brigade. Read more about Antietam here.

Here is some information on the inscriptions from StoneSentinels.com:

The State of New Jersey Monument at Antietam is on the corner of Hagerstown Turnpike and Cornfield Avenue. It was dedicated on September 17, 1903.

The figure atop the monument represents Captain Hugh C. Irish of the 13th New Jersey Infantry Regiment, who was killed not far from the monument. 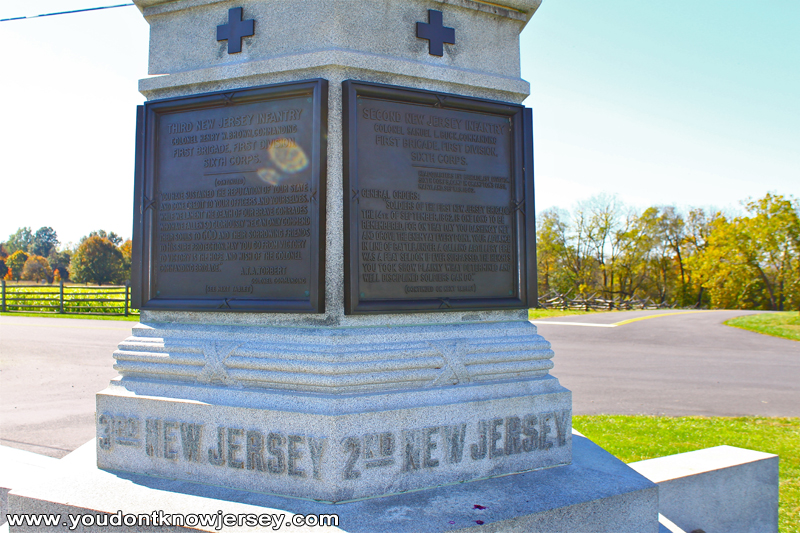 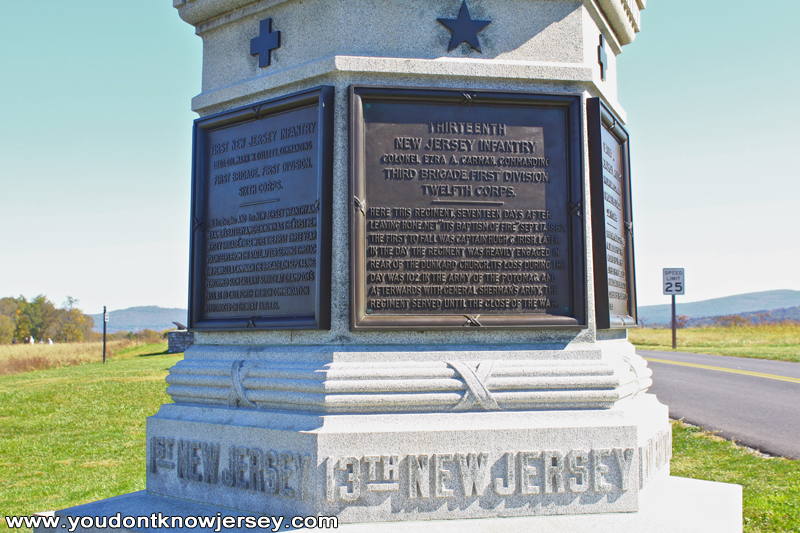 From the six panels circling the lower monument:

The 1st, 2nd, 3rd and 4th New Jersey Infantry and Hexamer’s Battery A, were known as the “First New Jersey Brigade.” These were the first three year Volunteers from the State. After serving through the peninsula campaign the Brigade on Sept. 14, 1862 performed such gallant service at Crampton’s Pass as to call forth the High Commendation reproduced on the next tablet.

Soldiers of the first New Jersey Brigade. The 14th of September, 1862, is one long to be remembered, for on that day you dashingly met and drove the enemy at every point, your advance in line of battle, under a galling Artillery fire was a feat seldom if ever surpassed. The Heights you took show plainly what determined and well disciplined soldiers can do.

“You have sustained the reputation of your state and done credit to your officers and yourselves. While we lament the death of our brave comrades who have fallen so gloriously we can only command their souls to GOD and their sorrowing friend to his sure protection. May you go from Victory to Victory, is the hope and wish of the Colonel commanding Brigade”. A.T.A. Tolbert Colonel Commanding

From its Bivouac at Crampton’s Pass the first New Jersey Brigade marched to the field on the morning of September 17, 1862, and took position 600 yards, easterly of this point near the Dunkard Church, where it remained until Sept. 19. It supported the sixth Corps Artillery and for six hours was under severe Artillery fire by which several men were killed or wounded.

Here this Regiment, seventeen days after leaving home, met “its Baptism of fire”, September 17, 1862. The first to fall was Captain Hugh C. Irish, later in the day the regiment was heavily engaged in rear of the Dunkard Church, its loss during the day was 102, in the Army of the Potomac, and afterwards with General Sherman’s Army, the Regiment served until the close of the war.

After engagement at Crampton’s Pass Sept. 14, 1862, the Battery was engaged on Sept. 17, at three different points on this field. From three to six o’clock the Battery fired 280 shells, 200 shrapnel and 15 canisters, forcing out of position two Confederate Batteries and repelling an Infantry force.

From the dedication plaque located underneath the 13th New Jersey panel:

Erected by the State of New Jersey in grateful rememberance of her gallant sons who fought on this field Sept. 17, 1862