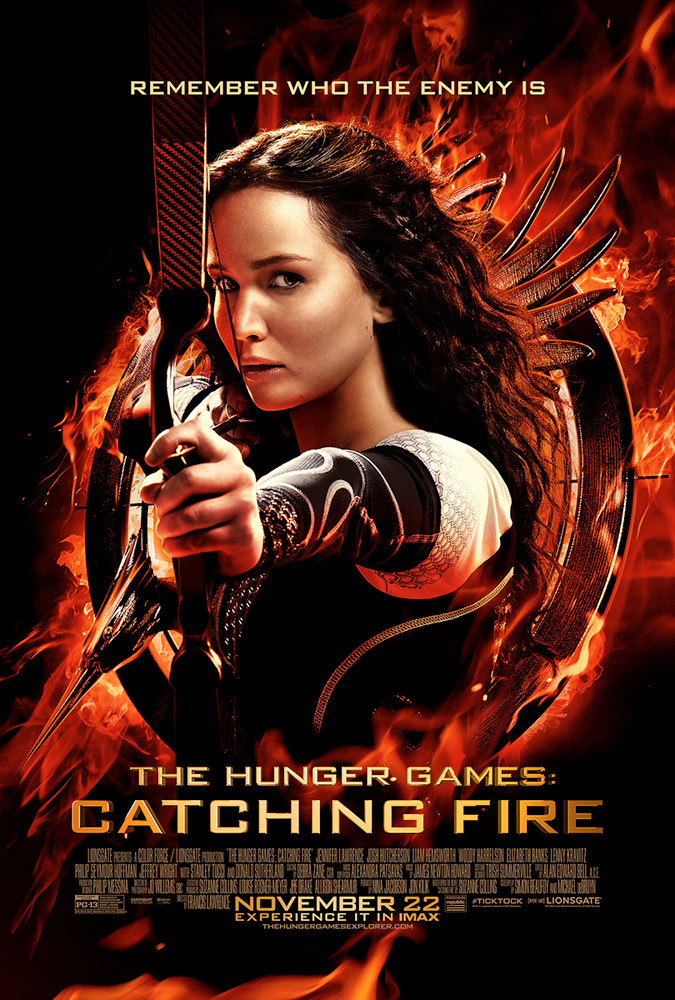 Jennifer Lawrence is back as Katniss Everdeen in The Hunger Games : Catching Fire, the second movie in the hugely successful franchise based on the book series. There are a couple things you should know before going to see this movie. The first is that you should see the original Hunger Games first in order to appreciate and understand the story of this film. The second is that this is basically the Empire Strikes Back of the Hunger Games franchise and the story structure is the same, which is to say this movie will be continued into the third installment. If you see this film, you are making a commitment to see the next one.

Just as in the first Hunger Games, this movie is crafted on a very high level in all aspects from the amazing visuals to the great acting. It is also similar in its lack of depth when it comes to explaining exactly how this post apocalyptic future society works. I guess you need to read the books to get a truly proper feeling for the social structure and themes. As the movie goes, you get an adequate enough sense of the overall situation as well as that the government is bad. One of the story points that I knew would happen is kind of forced but at the same time there is honest motive for it so I guess you can’t complain too much as it is believable.

Another similarity to the first film is the wide range of characters relevant to the story. An easy trap for movies based on young adult novels too fall into is focusing too heavily on the teenage characters but the Hunger Games avoids this pitfall by having characters of all ages in important roles. This time around we see pretty much all of the familiar faces from the original movie as well as some new ones and somehow they are all given enough to do that you don’t feel that any of them are short changed. Besides Jennifer Lawrence, we have Josh Hutcherson (Peeta), Woody Harrelson (Heymitch), Elizabeth Banks (Effie), Lenny Cravitz (Cinna), Stanley Tucci (Caesar), Donald Sutherland (President Snow) and Liam Hemsworth as Katniss’ actual boyfriend Gale who gets comparatively little time just like the first film. It is really an accomplishment that the story sports this many characters but still had the room to add new faces Jena Malone as Joanna Mason, an angry ‘Games’ competitor, Phillip Seymour Hoffman as Plutarch, the new game designer, Jefrey Wright and Amanda Plummer as Beetee and Wiress, a couple of eccentric and intelligent players, Sam Claflin as a player with quite an ego, Lyn Cohen as Mags, an older woman who volunteers to take a young girl’s place and a few more that I can’t think of right now. Just writing that sentence makes me realize even more how well this movie uses each actor in a way that is meaningful to the story. The real standouts of the newcomers however are Jena Malone and Phillip Seymour Hoffman.

This is a long movie at about 2 1/2 hours and sometimes the pace drags a little but overall it’s well done. I wish that some of the long running time had been devoted a little bit more toward explaining the social elements better. You still get the feeling that you are not 100 percent sure of what exactly is happening politically. I have heard that the books are much more thorough when it comes to describing the social history and structure so I will have to check them out.

A highlight of The Hunger Games : Catching Fire is that almost an hour of it was shot with IMAX cameras. If you can make your way to a real IMAX theatre, (not the digital IMAX type which most are) you will be in for an amazing movie going experience as the entire ‘Hunger Games’ sequence that the characters in the movie participate in was filmed in IMAX straight through from beginning to end. This is a must see in real IMAX.

If you liked the first Hunger Games film, you will not be disappointed by this movie. All in all this is a very good film and a worthy science fiction franchise that will deliver the resolution to its story in the next movie.

Credits info : There is nothing during or after the credits.