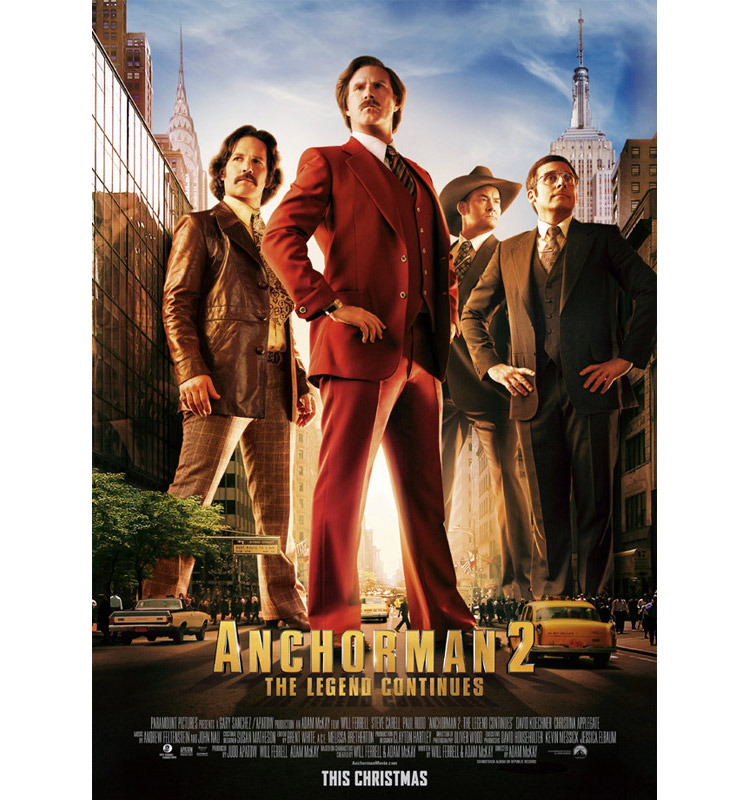 After 9 years Will Ferrell returns as Ron Burgundy in the sequel to ‘Anchorman’. Anchorman 2 : The Legend Continues is frankly a better sequel than the original movie deserves. This is not to say that the original Anchorman was a bad movie but in many ways a hit or miss affair like an episode of ‘Saturday Night Live’ or ‘The Kids in the Hall’. Some of the jokes worked and some didn’t. That’s understandable when working with experimental material like this. The original has enough brilliant, inspired and unique material that it holds a special spot in the history of comedies.

This new installment brings back all of the major characters from the first film, most of the supporting ones and even adds some new ones. Will Ferrell is joined by the rest of his news team,  Brick (Steve Carrell), Brian (Paul Rudd) and Champ (David Koechner). He is now married to Veronica Corningstone (Christina Applegate) and they are a co-anchoring the news. After Veronica gets promoted and Ron gets fired, he and his team join a 24-hour cable news network called GNN, a new concept in broadcasting at the time. There they meet a programming boss played by Meagan Good and the prominent lead anchor at the station, Jack Lime (James Marsden).

I don’t want to give anything away about what happens. All I can say is enjoy the wacky ride. Like the original, this movie is full of off the wall, weird and zany humor. In fact this film is even more bold and daring, committing itself to throwing all kinds of things at you, some of which you have never seen. Some of the jokes work and some don’t and different people will probably connect to different material. This movie is also loaded with cameos that you will not see coming.

The most remarkable thing that this movie accomplishes is the way it demonstrates everything that is wrong with the sad state of the news media today by showing exactly how it got that way. This film contains a brilliant social commentary that channels the classic movie, ‘Network’. Most satires about this type of subject matter are rife with political agenda. Anchorman 2 sees things clearly and tells it like it is. It’s so sad when a drama like HBO’s ‘The Newsroom’ with so many great writers, actors and directors is so clueless, irrelevant, out of touch and such a miserable failure. The Newsroom’s self proclaimed mission is to tackle this subject matter.

There is a great speech that Jeff Daniels’ character makes about why America is not the greatest country in the world anymore but even in the speech itself is poisoned by political bias and as a result the following episodes don’t actually educate the viewer as to what the real problems are. If you want some insight into the damage that the media is doing to this country pay attention to the subplot in Anchorman 2 that takes up maybe 10 minutes of screen time but speaks volumes in a beautifully subtle and non preachy manner. You will learn more than if you watched all 19 episodes of the 2 seasons of ‘The Newsroom’. The Newsroom is an example of the blind leading the blind. Anchorman 2 comes out of nowhere to do something it isn’t even required or expected to do and it does it perfectly. It shows how our news media went from being a constructive institution to a destructive one.

If you liked the first Anchorman, you will  definitely like Anchorman 2. If you thought it was a little weird, you may want to check this movie out and enjoy the wacky ride. It s bigger, better, braver and wilder than the original and the cast is full of comedic actors with perfect comic timing and delivery. I really enjoyed this movie.

Pin It
Previous post:
Our Favorite New Jersey Music in 2013 Next Post:
Hot Dogs We Ate in 2013