We’re counting down the hours to the Academy Awards tonight.  Did you know that the road to the Oscars started in West Orange in 1889? 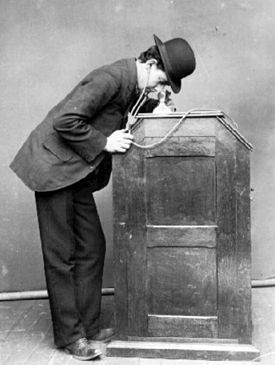 The first movie was developed in Thomas Edison’s lab in West Orange in 1889. The movie was shown via a Kinetoscope which was a motion picture exhibition device. The Kinetoscope was designed for films to be viewed by one individual at a time through a peephole viewer window at the top of the device. The Kinetoscope was not a movie projector but introduced the basic approach that would become the standard for all cinematic projection before the advent of video, by creating the illusion of movement by conveying a strip of perforated film bearing sequential images over a light source with a high-speed shutter. First described in conceptual terms by U.S. inventor Thomas Edison in 1888, it was largely developed by his employee William Kennedy Laurie Dickson between 1889 and 1892. Dickson and his team at the Edison lab also devised the Kinetograph, an innovative motion picture camera with rapid intermittent, or stop-and-go, film movement, to photograph movies for in-house experiments and, eventually, commercial Kinetoscope presentations.

So while you’re watching the Oscars tonight, be proud of New Jersey and Edison’s labs for starting it all!

Pin It
Previous post:
Events – State Theatre NJ – March 2014 Next Post:
Artists from New Jersey to Check Out at SXSW