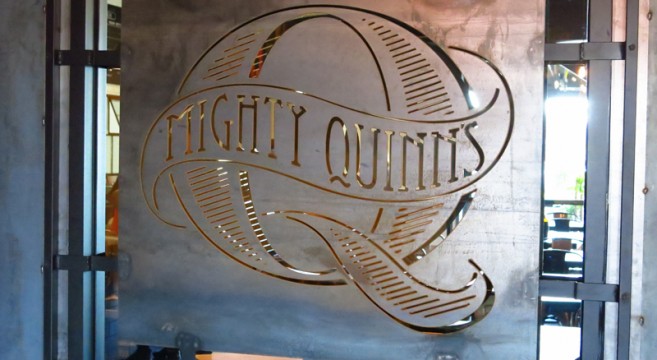 We’d been hoping Mighty Quinn’s would build a New Jersey location for a while and we finally got our wish!  Their Clifton location opened their doors on March 20th and we made sure we got there right away. 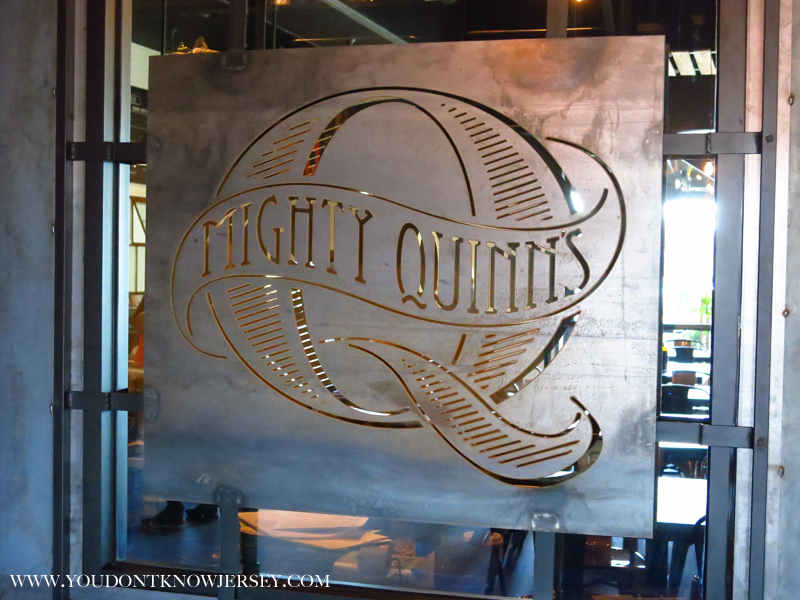 Located right on Route 3 just a few exits from the Parkway in one direction and a few more exits from the Turnpike in the other, it couldn’t be easier to get to. Parking can be a little hairy at dinner time but it’s totally worth it! 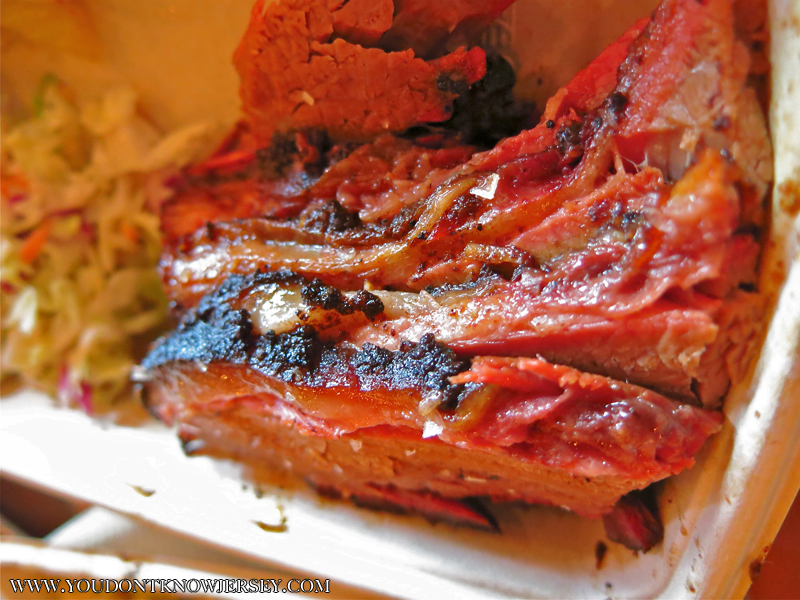 Let’s get straight to the meat since this is what Mighty Quinn’s BBQ is all about.  They smoke all their entrees over wood for a real BBQ experience.  This is their famous brisket; slow-smoked for 18–24 hours, it’s unbelievably moist and had a great saltiness.  It went perfectly with a teeny bit of the BBQ sauce that’s out on all the tables. 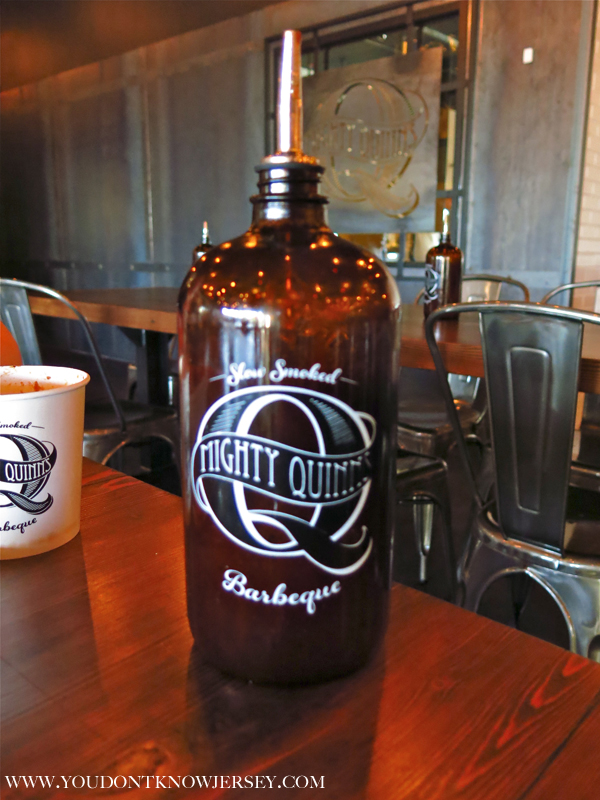 The sauce poured well out of this bottle and I think it was a little thinner and not as sweet as the usual sauce you get elsewhere.  It was great for dipping pieces of brisket and pouring onto the last few bites of a sandwich.  I even ended up adding some to the baked beans because I liked it so much. 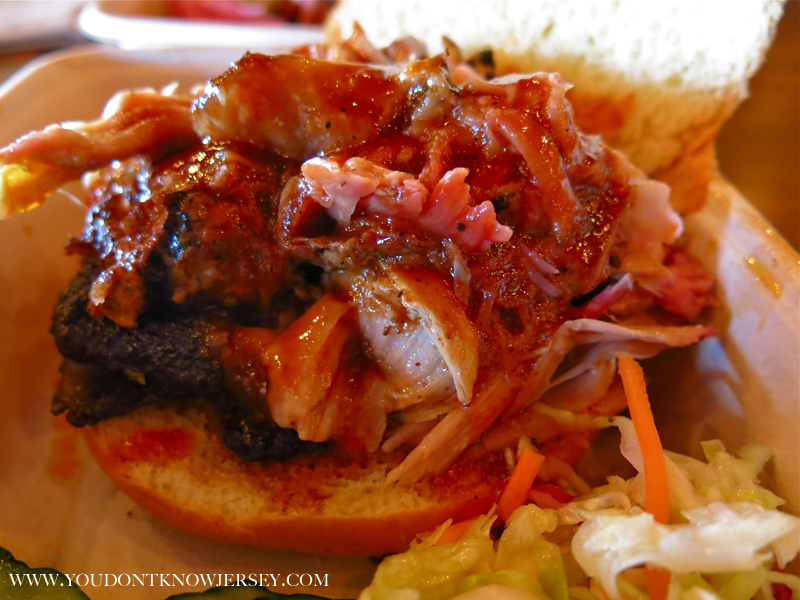 The pulled pork sandwich was so moist that we actually questioned whether it was pork.  It had a ton of flavor without having a ton of sauce.  We watched them pull it apart right in front of us so you could immediately see how juicy and delicious it was going to be.  Even the buns were good and did a nice job soaking up all the meat and BBQ juices.  By the end of the meal, neither of the two buns we had were a soggy mess. 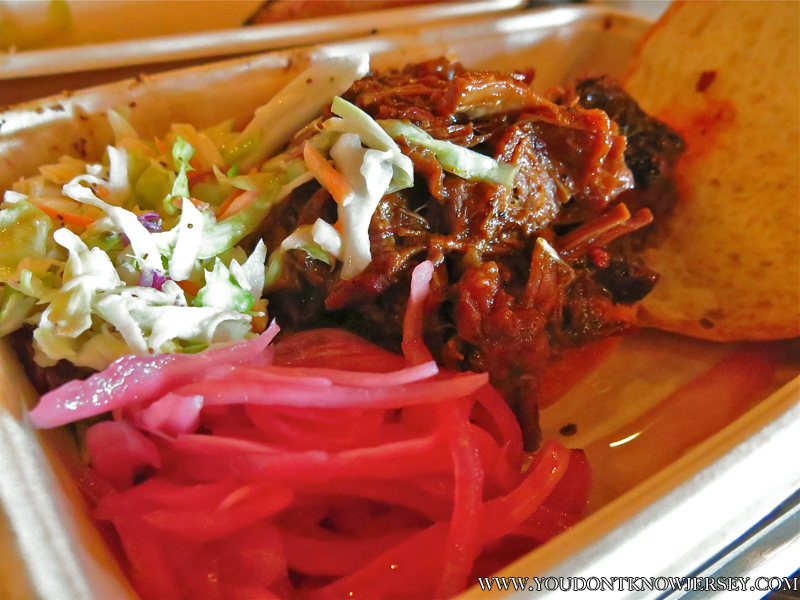 And, finally, the burnt end sandwich was the last of the meat we ordered. Wow.  Even more beefy flavor than the brisket and there was lots of that good sauce.  This was an outstanding sandwich.  Each entree came with a choice of vinegar or creamy slaw and  a pickled vegetable.  You can see the creamy slaw above with the pickled red onions.  The onions were really good topped on the burnt end sandwich. 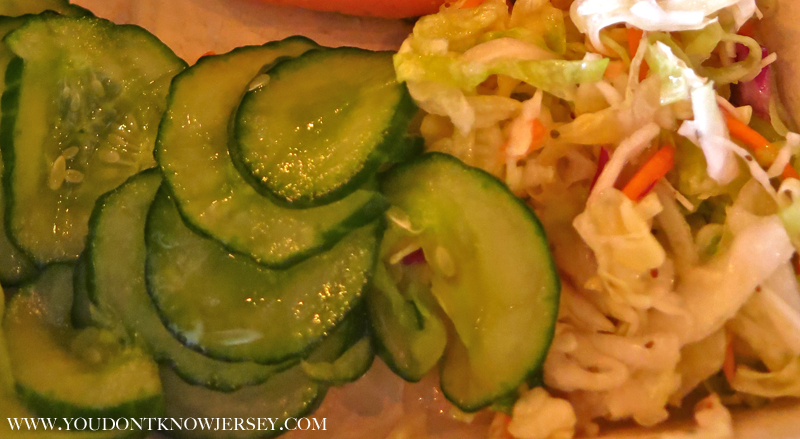 Cucumber, celery, red onions and chiles are all the vegetables on the pickled menu. We tried everything but the chiles.  Boy, was that an oversight!  The cucumbers, seen above, weren’t overly pickled and still had a fresh cucumber taste.  I didn’t put these on anything, I just ate them right up.  I couldn’t decide whether I liked the vinegar or creamy slaw better.  I liked both… a lot.  Neither were overly dressed and had a nice fresh cabbage taste. 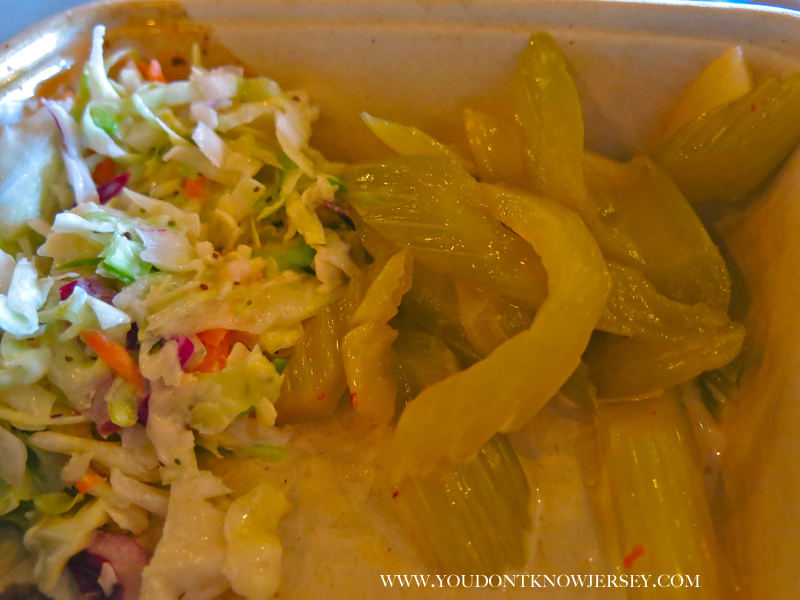 Here’s the pickled celery next to the creamy slaw.  These were my favorites of the pickled veg.  The celery went great with pieces of brisket. 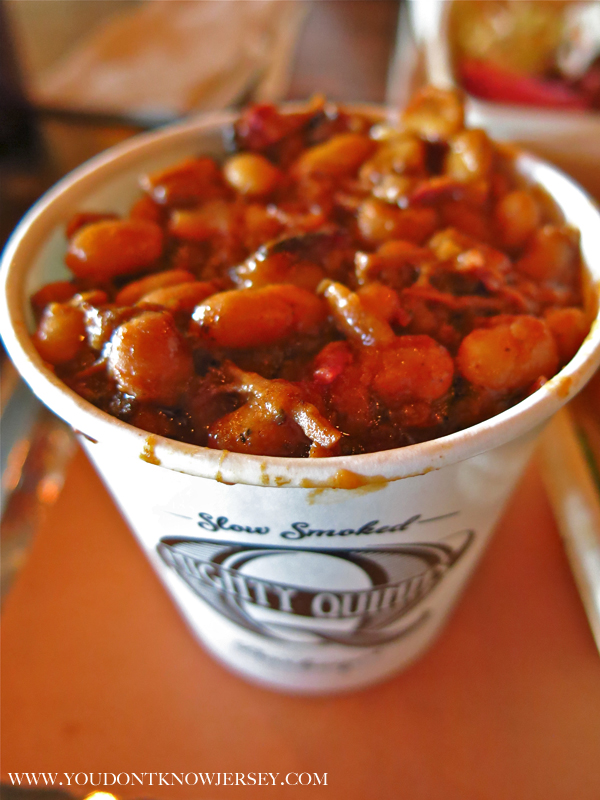 We rounded out this feast with a large side of burnt ends baked beans.  Oh, the burnt ends baked beans.  Generous pieces of meat in a moderately dry bean and sauce mix.  The beans were nice and creamy and every once in a while you’d get a little crispy chunk of beef with shreds of meat thoughout.  I love a restaurant that is as thoughtful about the sides as they are the entrees.  This is definitely that kind of place. 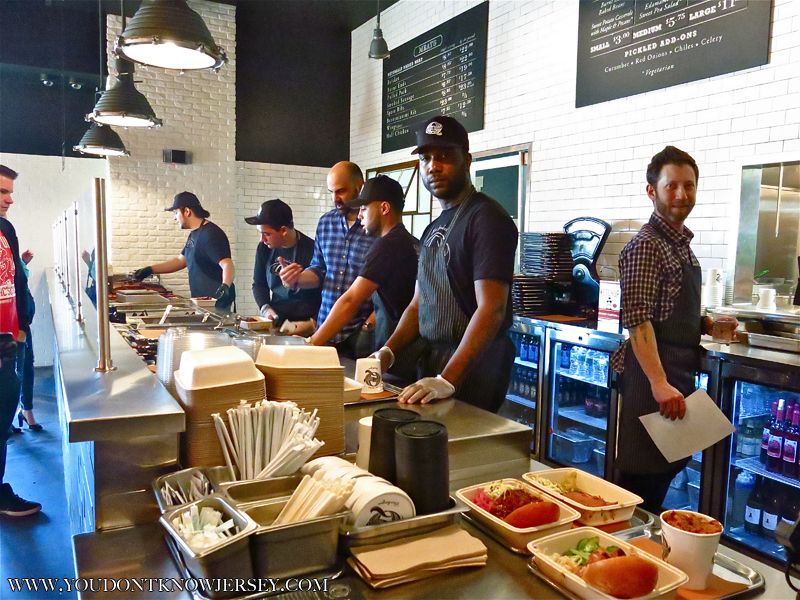 Mighty Quinn’s is a fast casual style place like Chipotle so you order and see it get made as you make your way down the counter.  Counter staff and the owners were very attentive and friendly. They seemed to enjoy being there as much as the customers were. 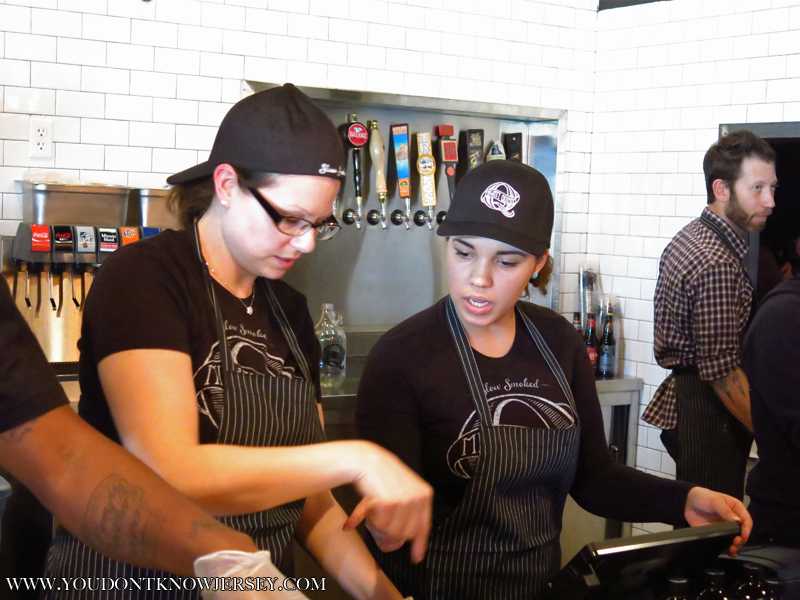 There are six beers on tap and six bottled beers available as well as housemade ice tea, fresh ginger ale and sodas. 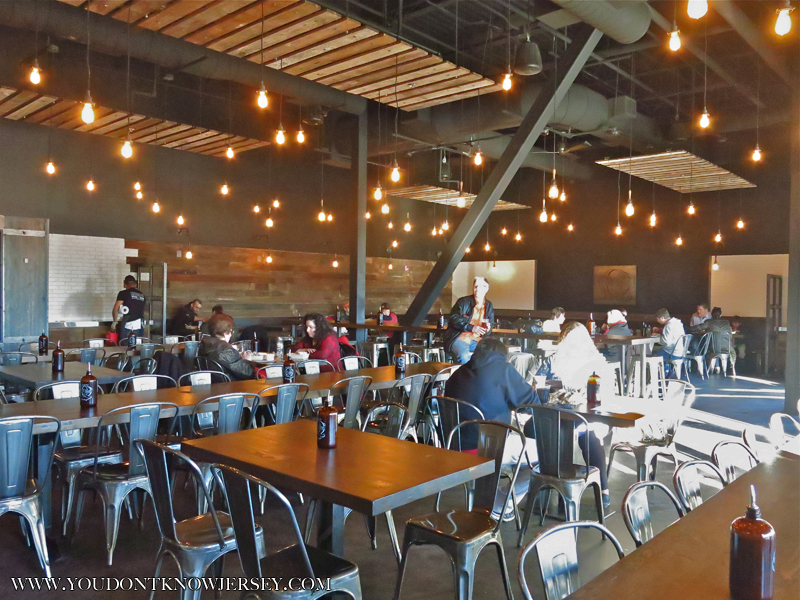 When we arrived at 6:00pm, the dining room wasn’t too full which was nice because we could see the whole room and all the attention to detail.  They mentioned on their Facebook page that the wood on the walls was salvaged from an old schoolhouse in the Bronx.  Their food is as local as possible as well as their decor! 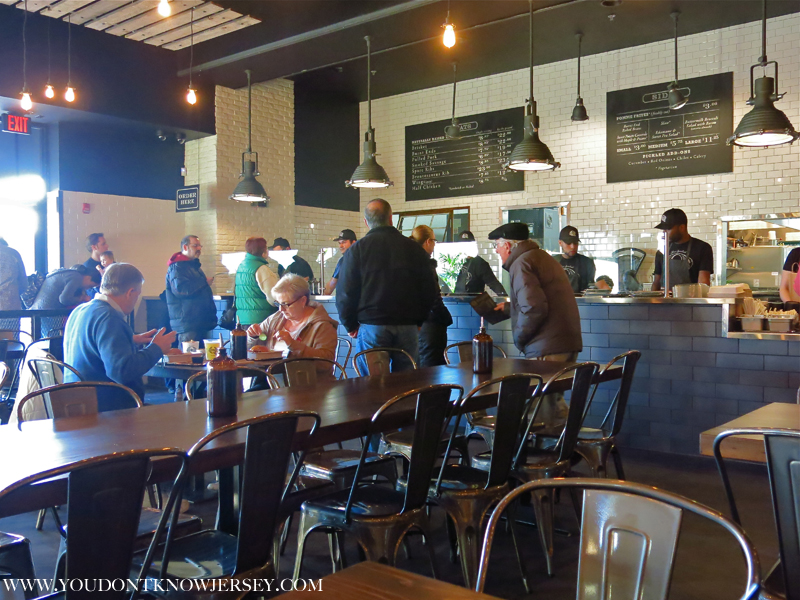 It definitely started getting busier, the later it got.  Lots of families were there with all the kids. And, many couples were there, too, almost all of them eating off each other’s plates.  This is a restaurant where you want to try more than one thing. 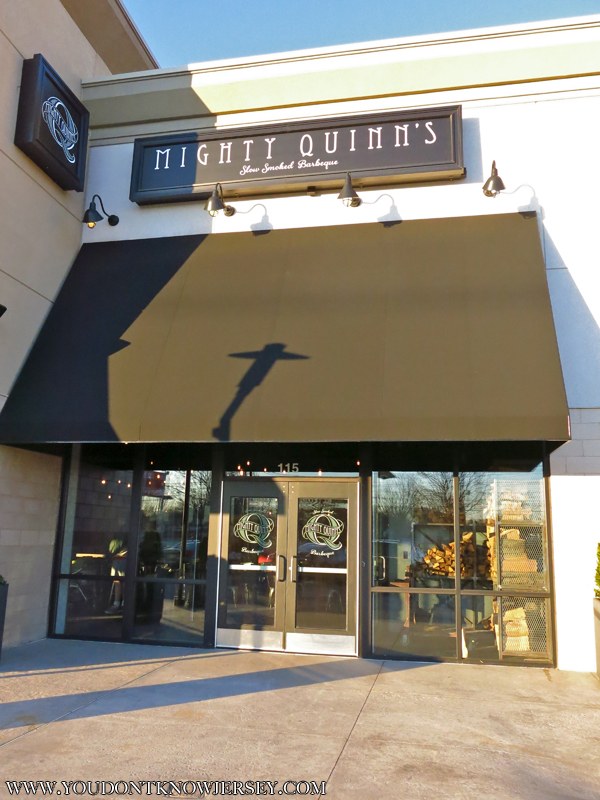 The restaurant is visible from Route 3 West and is easily accessible from the Bloomfield Ave. exit and Allwood Road.  Park anywhere and go around the Chico’s corner and you’ll see it right away. Or, just follow the smoke smell.  That’s what we did! 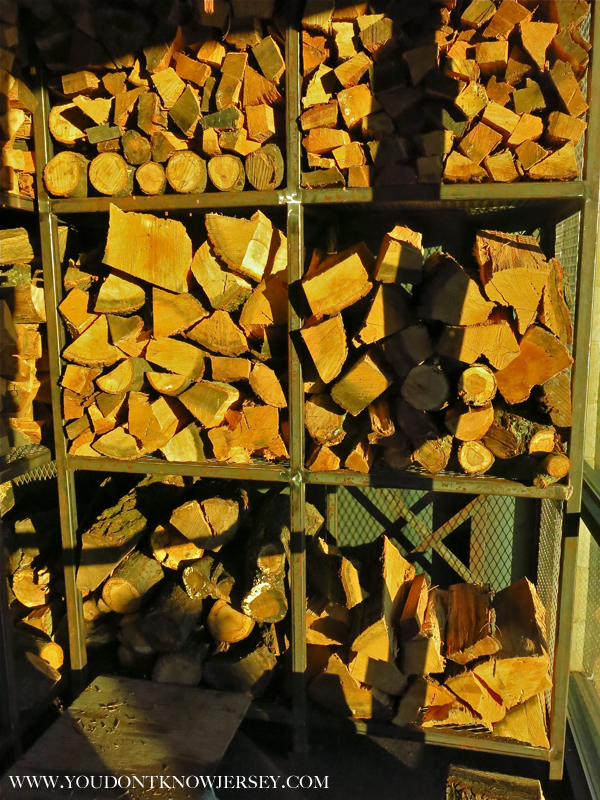 You can smell the smoky goodness before you even get to the door.  And, our clothes smelled like smoke for several minutes after we left.  Just a delicious-smelling reminder of the great meal we had!

Check out the rest of our food articles here.