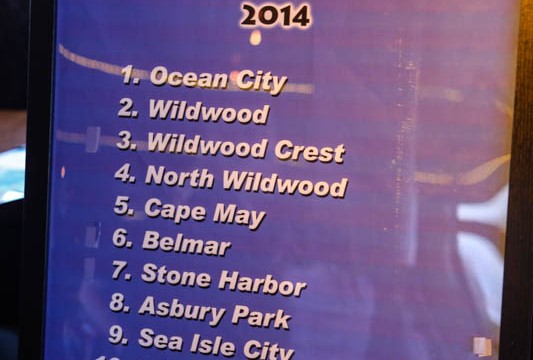 The votes have been counted and the results are in! Ocean City ran away with the wins this year.  Not only did they get voted Number One Beach overall, they also won Favorite Family Beach, Favorite Ecotourism Beach AND Favorite Day Trip.  Amazing! 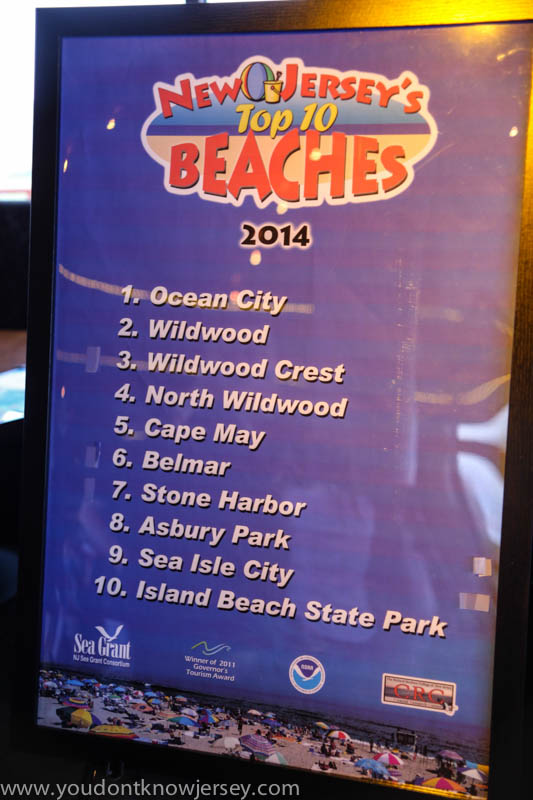 Last year’s winner was the The Wildwoods and this year the three towns making up The Wildwoods were divided into their own categories.  They probably would have won this year if they were still all together in one group because they still carried out Second through Fourth Places on the voting list.  They were followed up by Cape May, Belmar, Stone Harbor, Asbury Park, Sea Isle City and Island Beach State Park.  Congratulations to all the towns for placing in the Top Ten for 2014!

The State of the Shore report has been given since 2003 and brings together scientists and government officials to speak about how the shore weathered the winter months and what kind of summer we’re looking forward to. 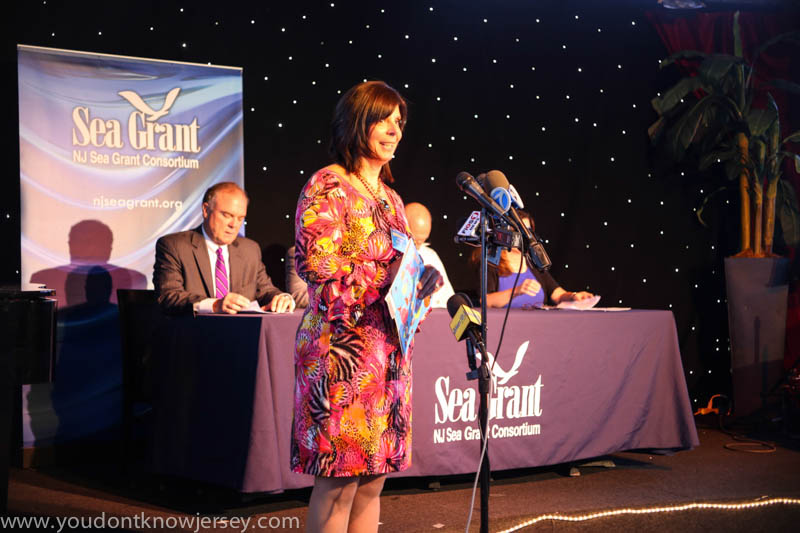 Claire Antonucci was the host.  She is the Executive Director of the New Jersey Sea Grant Consortium and she talked about the Rain Barrel Art Project that the State of the Shore introduced this year. 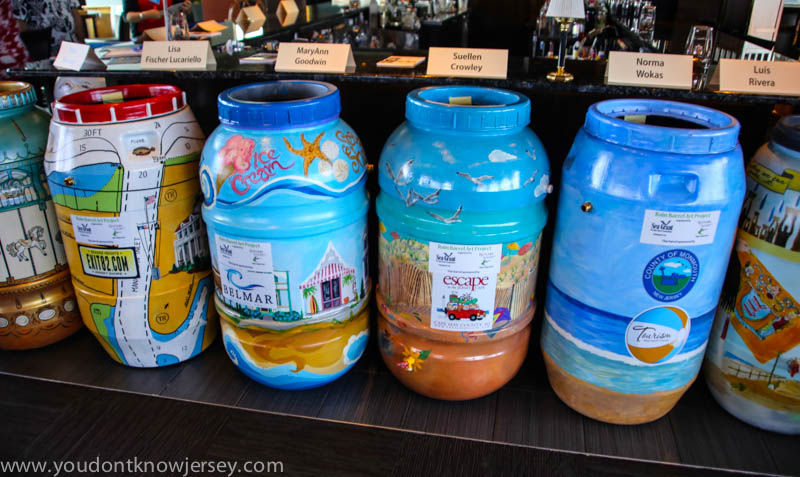 The Sea Grant Consortium and Rutgers University Cooperative Extension Program were co-sponsors of the project and the barrels were set up for us to view at the State of the Shore. Twelve artists were chosen out of many who applied and barrel inspirations were assigned based on the sponsors for each barrel.  The barrels will now be touring the shore communities of New Jersey and community members are asked to vote for their favorite one beginning later this month.

Since we just visited Lucy the Elephant, this was our favorite one. 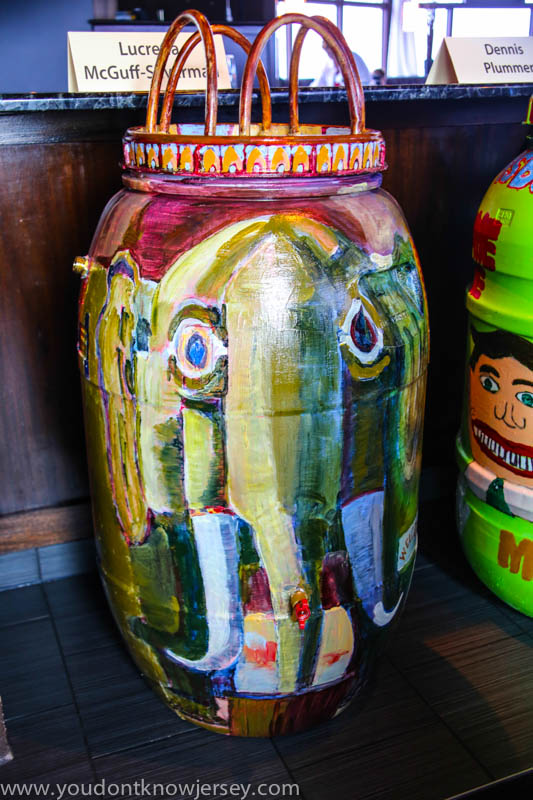 We’ll tell you more about this project and the artists once the barrels start their summer tour. 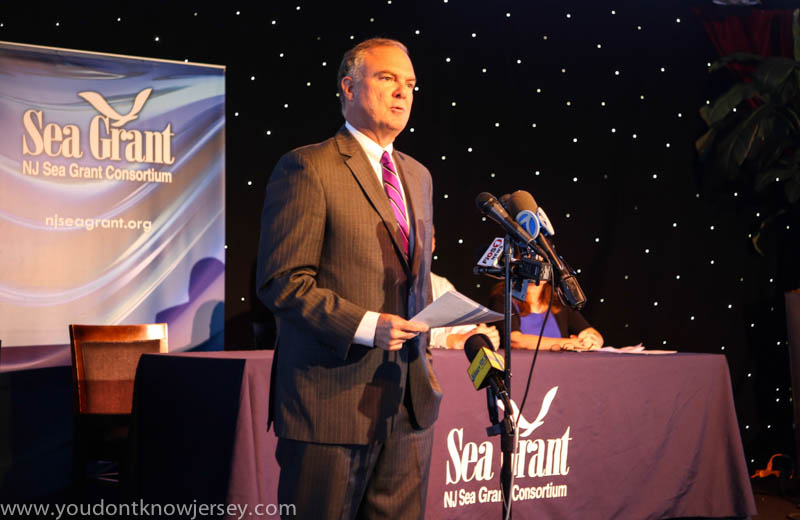 Commissioner Bob Martin of New Jersey’s Department of Environmental Protection was the first speaker.  He said that nearly every beach in New Jersey is open now because water quality readings have been terrific.  He told us about www.njbeaches.org which reports the findings of daily beach evaluations done by the state and by Rutgers University.  Beach closures and water quality information can be found for all of NJ’s beaches on the site as well as other scientific and historical data.  He went on to talk about the numerous beach replenishment projects that have been going on since Hurricane Sandy.  Beach communities and the Army Corps of Engineers have put 44 million cubic yards of sand on our beaches since the hurricane and are working toward a goal of 100 percent engineered beaches for future erosion protection.  Future projects are on the way costing nearly $1 billion and will help Raritan Bay now and five other sites (like Ocean City and Absecon) after Labor Day this year. 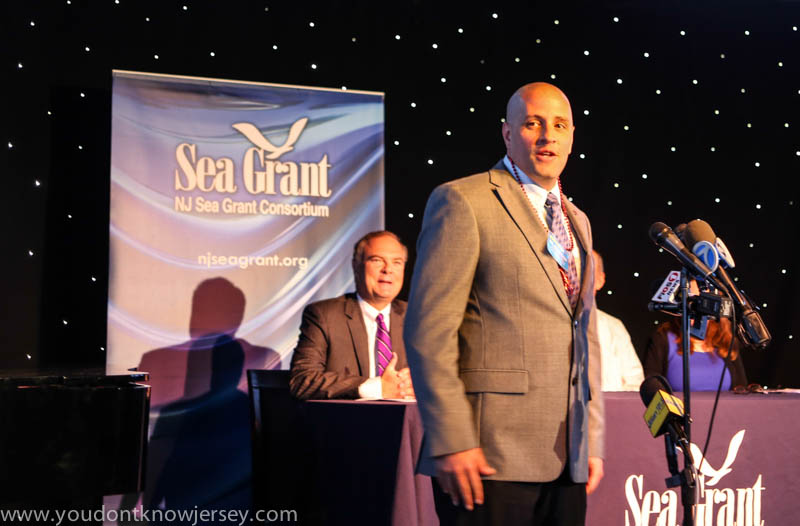 Dr. Jon Miller, a Coastal Processes Specialist from the NJ Sea Grant Consortium Extension Program and Research Assistant Professor at Stevens Institute of Technology, spoke next. He reported on weather events over the winter that impacted New Jersey’s shoreline.  There was only one instance of moderate flooding and four minor flooding events but none of them did any major damage.  The worst storm, he said, of the 2013-14 winter brought 16 foot waves which were only half the size of the Hurricane Sandy waves.  He reported that data from the Colorado State summer weather forecast shows the probability of only 9 major storms throughout the US, three hurricanes (one major one) and none that should reach the Northeast.  This is a lower estimate than previous years so he believes that we should have a pretty uneventful hurricane season. 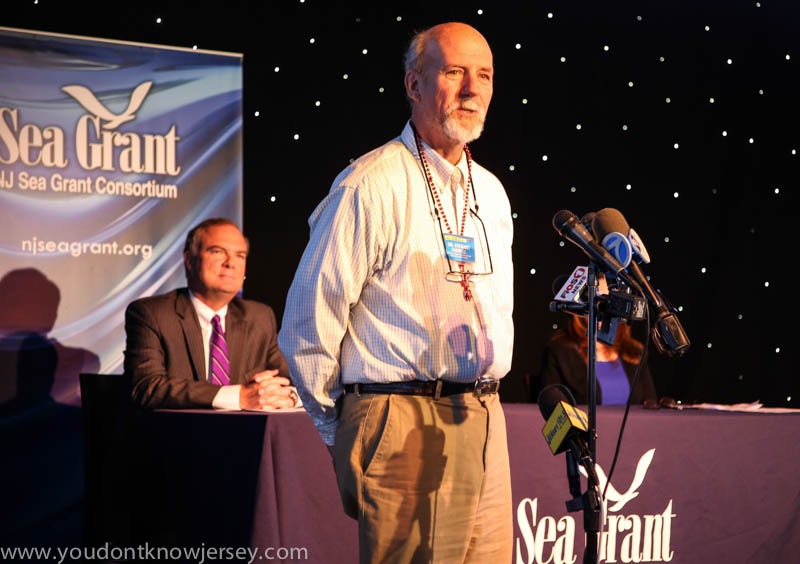 Dr. Stewart Farrell, Director of Richard Stockton College Coastal Research Center and Project Co-Founder of the New Jersey Top Ten Beach Project, was next. He spoke about the study of the shore that he’s been doing since 1986 in cooperation with the state. Each beach community has at least one reporting station and many have multiple ones depending on the length of their beaches.  The reporting stations monitor shoreline change and sand volume.  His research since Hurricane Sandy has shown that since Sandy, 81 cubic tons of sand have been replaced and that we’re nearly back to where we were before the storm.

He went on to talk about storm impacts that aren’t well publicized.  South of Bayhead there are many tons of storm debris in the many bays along the coastline.  This dredge material is made up of natural and artificial products and isn’t easily re-used or stored.  A major effort is underway to quantify the amount of debris there is and then to figure out what to do with this material so that the bays are back to being useful for recreation and fishing.

Another impact that hasn’t been talked about much and that Dr. Farrell brought up was the horseshoe crab population in the Delaware Bay area of New Jersey. Apparently, horseshoe crabs will only lay eggs in the coarse sand that lined the bay coastlines by the Delaware Bay.  Sandy washed away most of this coarse sand because winds were coming in from the west and pummeled those beaches.  All that was left was salt marsh material on the shoreline and the crabs didn’t lay their eggs there.  70 cubic tons of quarry sand was put in and this year there are thousands of eggs! 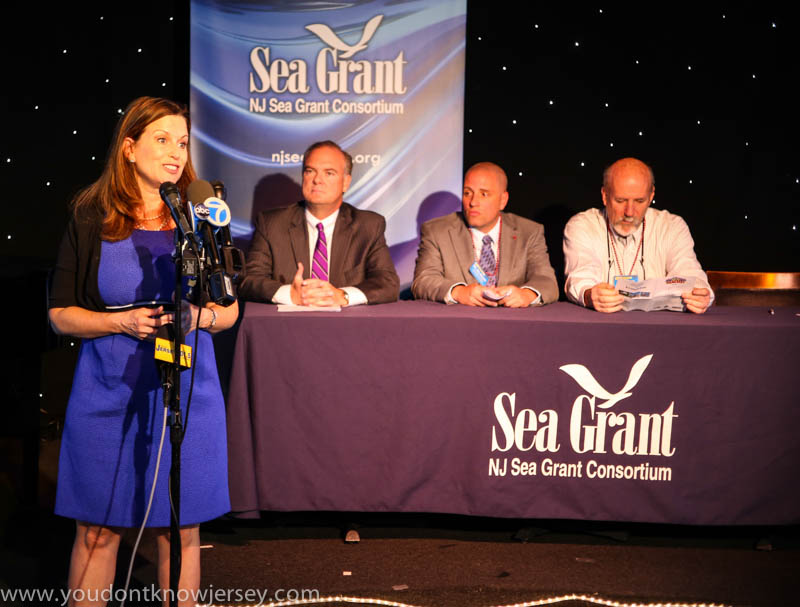 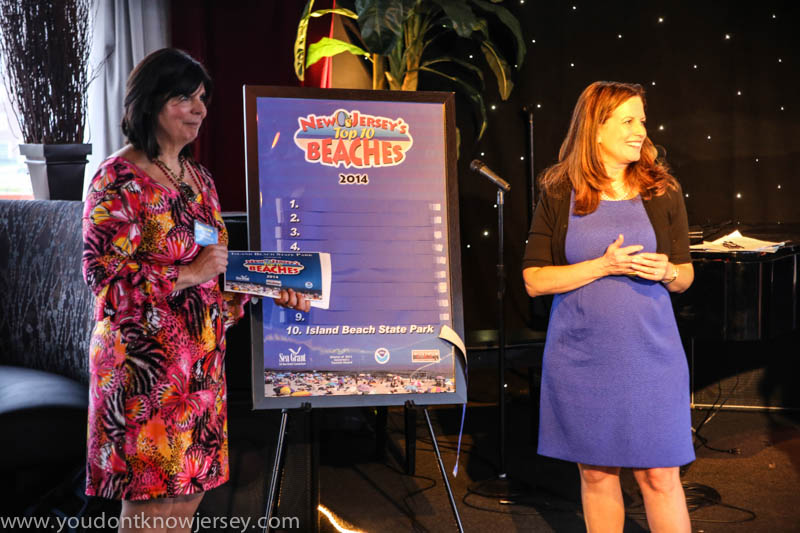 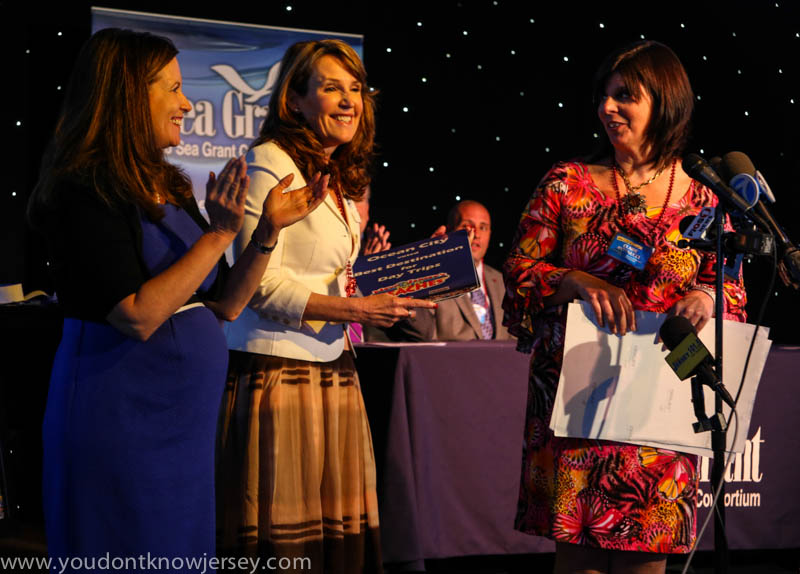 Here’s a video of all the towns being announced:

Here are all our pictures from the event: 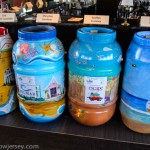 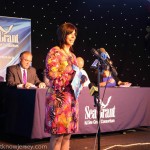 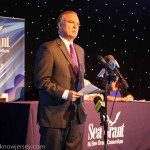 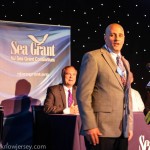 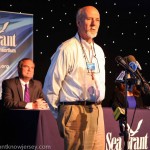 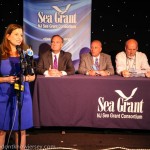 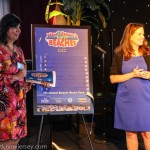 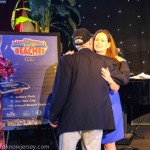 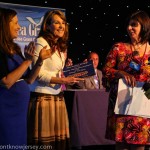 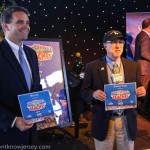 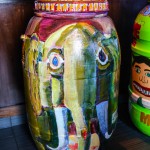 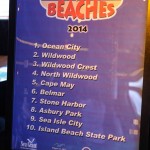