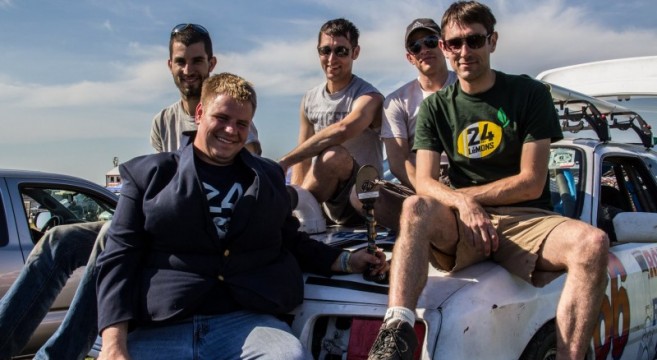 When we last left the RotoMotorSportNJ team they had just won the hard earned Judges’ Choice award at the 24 Hours of LeMons Real Hoopties of New Jersey race back in May. They overcame a lot of adversity on that weekend, including engine problems and having four reporters from a website following them around for an entire weekend.

Once again the 24 Hours of LeMons will be coming to the New Jersey Motorsports Park for their There Goes The Neighborhood event on August 9-10. This begs the question…Will RotoMotorSportNJ be ready in time? Will they succeed in the August NJ heat? Will we bring enough beer? 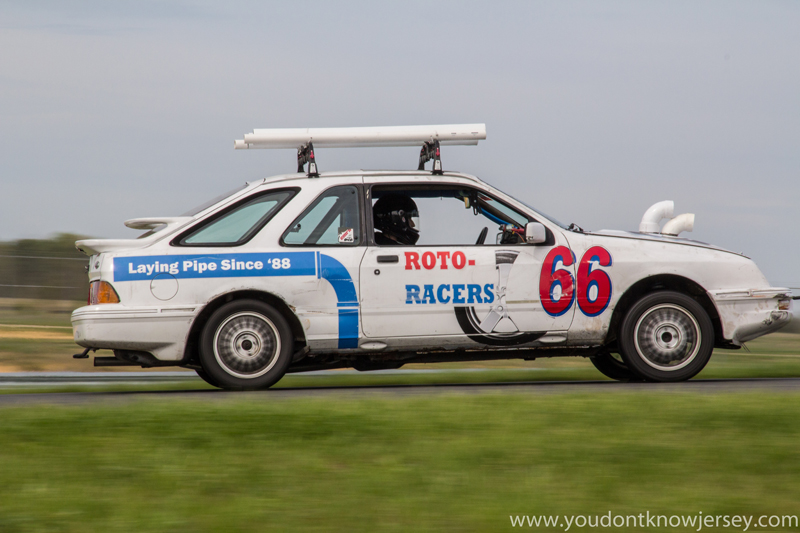 We asked team member Kevin Dunne a few of these important questions.

First things first, how is the car?

As usual the car is currently in many, many pieces, most of which are haphazardly strewn around Matt’s garage. Once we did some more diagnostic work and downgraded our last race-engine to lawn ornament status, it was time to go on a hunt for a cheap replacement. Dante found a well-used Thunderbird Turbo Coupe engine for $400 and I went to pick it up. The old engine is out, and we are currently working on getting the new-to-us one in.

Were you surprised to take Judge’s Choice in May? How do you top that?

As you noticed, the majority of the awards given out go to teams that aren’t anywhere near the front of the pack. So, we were joking a little bit that we had finally done poorly enough to actually qualify for a trophy. Personally, I was quite surprised to hear our name announced at the awards ceremony. As much fun as it is to be recognized for our slow driving, incompetent wrenching and odd humor, I think just getting out and turning more laps next race would be even better!

You had some issues with the car last time. Do you learn from each event?

Obviously not very much, we keep going back! We’re getting faster at changing out parts, but seem to be breaking more and more things on the car, so in the end we’re still losing ground.

What was the biggest lesson learned from that race?

Don’t leave the spare engine at home. The first time we left it in Matt’s garage was the first time we needed it. Of course it has nothing to do with saving time. By the time it was picked up and brought down to the track, we were still standing over the car scratching our heads, and trying to figure out a plan to get the first bolts out to pull the old engine.

Do you have to prepare yourselves or the car differently for the August heat? Besides extra beer.

We’ll definitely be running the cool shirts! And we are planning to improve (at least in theory) the car’s cooling system, which seems to have played a part in the last failures that we have had.

Is the bribe swag already picked out for August? It’s gonna be tough to top the Christie suit!

I’d like to say that we have a fantastic, top-secret idea that is going to make all of our mothers even more embarrassed of us. The real truth is that we probably won’t even begin to think about it until 5 minute before the BS inspections begin. Since my fiance Jen was so instrumental in making that last one happen, I’ve asked her to help out again, so we at least have a chance!

Here is a cool video the guys shot from inside the car!

The 24 Hours of LeMons is a lot of fun for the whole family. Tickets for the upcoming event can be purchased here.