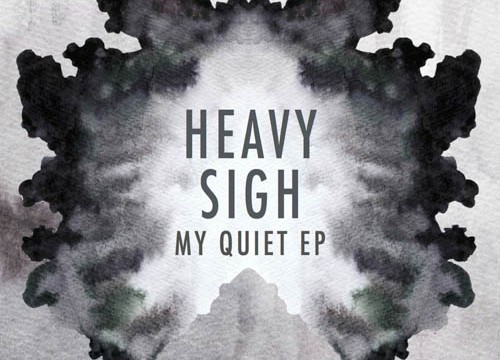 You never know what bands you will come across while browsing around Facebook for new music. There’s lots of good stuff on there and occasionally you come across something great. Amazing actually in this case. That is how I learned about Clifton-based Heavy Sigh. They recently released their debut EP My Quiet and it is a stunner. They describe their sound as dream pop and while that is certainly an apt description there is an intelligence and wit that makes it stand above other music in the genre.

The album opener “Rains” starts with a classic dream pop vibe. Over lush guitar from Nick Hernandez, singer Suzy Forman’s angelic voice surrounds the listener in a wall of sound. You can tell right away that the band knows this music. “Chlorine” is a slower, quieter song with minimal lyrics that is buoyed by a wonderful understated trumpet by Gregory Maniago. “Tell Me What State You’re In” has a killer bass line from Eric J Scholz on a song about loneliness that finds the singer wearing her away partner’s t-shirt and sending photos of her alone in her room. The song finishes with a great heavy fuzz guitar finish and Josh Alberg’s pounding drums. The title track “My Quiet” returns to a slower pace in a 6 minute chill out tune where the singer  laments “Please let me know if you’d rather stay at home, I understand if it’s one of those nights, I have them all the time.”

They saved the best for last with the magnificently pensive “C.I.P.”  Slightly sadder and darker than the other tunes it starts with a mournful guitar and horn that sweeps the listener along on a wave of luscious melody. Lyrics like “Calm down, I order my window reflection as I stare through my own eyes” convey the melancholy in her mood. The song allows Forman to show off some vocal range as she sings “I’m so tired, I’m so tired.” The song ends in a swirl of guitar. It is a showstopper.

Forman has a voice that reminds me a bit of the wonderful Julee Cruise and her work on the groundbreaking television show Twin Peaks. Take that airy voice and combine it with the dream pop/shoegaze melodies and you have that something special that Heavy Sigh has created. You don’t hear a lot of this type of music out of NJ bands these days so Heavy Sigh is more like a breath of fresh air. The band is on to something.

You can check them out this Thursday at The Court Tavern in New Brunswick.

The band answered a few questions for us below:

Suzy: Eric and I met through mutual friends probably 7 years ago. I used to go see his old band before I knew him. I met Josh when he joined Eric’s other band, A Film In Color. And Nick and Greg I just sort of met because they were friends with Eric and Josh and we also went to the same shows/hung out around the same people.

Eric: I knew Josh from playing shows together and then one day we started playing music together. I met Greg and Nick because they played in Community with Josh’s brother.

Greg: I played bass for one of Josh’s old bands. From there I met Nick through Josh’s brother and got a chance to play in a band with him as well. Eric and I met at a house show in Ridgewood. I ended up working with all three of them at a coffee shop for about a year and a half. I can’t remember whether I first met Suzy at an A Film in Color show or a Korean restaurant.

Josh: Eric forgot to mention that we used to work at Guitar Center together back when we both had stupid long hair.

Nick: I met Eric through one of my old band members, because he actually did the recordings for our first release at the time. Suzy I’d met through Eric, and Josh I’d actually known since I was eleven, since he’s one of my friends’ older brothers. It’s a deeply rooted web of connections, I’d say. Greg I met through one of my old band members, and was eventually in a band with me for a few years before we wound up together again in Heavy Sigh.

You recently changed your name from Gumshoe. How did you come up with Heavy Sigh?

Suzy: I mean, first we came up with at least 100 names that were already taken. We wanted something that fit the kind sound we ended up with better than Gumshoe. I was actually just lying in bed one day and randomly thought of “Heavy Sigh”and searched it all over the internet to find nothing at all. I think it suits us nicely.

Eric: Although, there is a metal band from Japan called “Sigh.”

Nick: Suzy actually came up with Heavy Sigh. I merely gave it the okay.

You formed last autumn. What are some of the challenges you face as a young band?

Eric: Organizing band practice can be pretty tough because everyone has their own schedule and, especially when you’re first starting out, it can be tough to fit another commitment into your life.

Nick: I definitely agree with Suzy about paying for things, and just simply getting people to listen to your music. And Eric is absolutely correct about tacking on a huge commitment. However, I think it’s pretty difficult being older and in a band. Having a younger audience tends to make the following a little more fierce. The band you follow in high school is the band you’re obsessed with. The bands you follow in college, or post-grad years are just bands you’re really into, and not your entire musical world. If anything, I think there’s a prime age to be a band. When you’re just old enough to drive and afford things, but not old enough to have a jaded or weathered audience, you have a pretty ripe moment in time.

My Quiet sounds very cohesive. Did you do a lot of rehearsal before recording the EP?

Suzy: Actually, not at all. It’s pretty hard for all of us to get together regularly. We wrote “Tell Me What State You’re In” probably five days before we went to record, and we live-tracked, so we’re lucky everything came together the way it did.

Eric: Yeah, we were still finalizing parts the day we went in to record. Josh came up with the drum pattern for C.I.P. while we were tracking. It was all very last minute because Josh and I had just gotten back from being on tour with AFIC two weeks before. But, in retrospect, I think that might be part of why things came together the way they did. Josh and I had just played together every night so we were pretty comfortable, even if we didn’t know what we were doing. Plus we’ve been playing together for, I think, over five years now.

Nick: Oddly enough, not really. We rehearsed over the course of four or five months, but maybe for a totally of ten times, and I think that’s a pretty liberal estimate.

How was that first show in Montclair at The Batcave? What did you take away from the experience?

Suzy: It was awesome! We saw lots of friends and new faces, and the other bands were great.

Eric: I realized that we probably can’t play with glockenspiel for most shows. Even at a place with good PA support, it can be difficult to mic it up since it’s such a quiet instrument.

Josh: It was really cool to see our friends and local scene come out to support us at our first show. It also helped give us some confidence, since other than a few rehearsals, we hadn’t really played some of the songs as a full band.

Nick: I think we killed it. People were really into and it meant a lot. I learned what it’s like to be in a band and not be the front person. Just getting to sit back and follow someone else’s lead was new, and it was nice to not feel like I had to entertain everyone. I got to really focus on my parts and I appreciate those moments.

Suzy: Yes! We have a few lined up for the fall in NJ, Philly, and New York state, but we’re hoping for a few more around northern NJ and NYC later on this year.

Suzy: New Jersey gets a lot of hate but I like how everyone who grew up here knows that it has an indescribable charm.

Eric: I don’t know. I don’t really leave the house.

Greg: Diners. Our pizza and bagels are pretty good too.

Josh: As the only member of the band who doesn’t live in NJ anymore, I can definitely say that I miss the heck out of diners. Brooklyn is cool and all, but it’s really hard to beat getting solid breakfast food at 2am.

Nick: I really like New Jersey. I love that we have four full seasons, typically speaking. And I love how perfectly located we are. The outdoors are nearby, so is New York City, and everything in between is right here. And I like the people, I sincerely do. The pizza and bagels are unequivocally the absolute pinnacle of pizza and bagel history, and consistently so. Also, everyone in New Jersey has a tacit bond over the fact that we are collectively the butt end of countless jokes. When you’re from New Jersey, it’s like being a Mets fan. Mets fans stick together and swear by one another, even if their team is repeatedly mediocre.