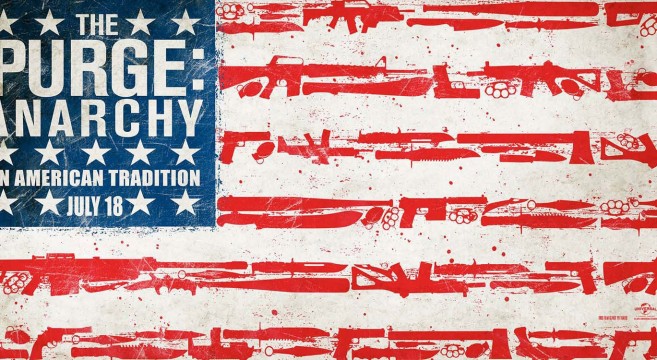 Last year Purge came out and created a new low budget sci-fi/horror/suspense franchise. The original Purge was a home invasion movie set in the suburbs with a well-to-do family as the main characters. Like any good sequel should, this film changes things up and explores new ground by moving to an urban setting. This time we follow characters through the city on a night where survival is the primary goal.

The Twilight Zone type premise works well as long as you can suspend your disbelief about some glaring logic problems. That said, once you accept the situation, this movie delivers decent characters, suspense, satire on society and commentary on human nature much like the old Twilight Zone episodes did. Writer/Director James DeMonaco is back with overall a slightly better movie than the first and brings brains and a touch of style to the horror genre. The actors are all solid with Frank Grillo giving a standout performance as a man bent on revenge letting his conscience rope him into helping others. Michael K. Williams is also good in a small role as a hero of the lower classes.

Like the original, this film capitalizes on class warfare and sets up the rich as a target. While there are valid points to be made in this regard and one of the best scenes in the movie takes place at a dinner party for the rich, some of the commentary doesn’t really make sense. When the movie suggests that part of the reason that the rich want to kill the poor is greed, you wonder what the writers of the film were thinking. That completely lacks logic as the poor represent a source of cheap labor as well as being customers they can sell to. Greed is a good evil motive for a lot of things but this is not one of them.

Overall this movie is entertaining, briskly paced, has some messages and commentary and represents an improvement over its predecessor.