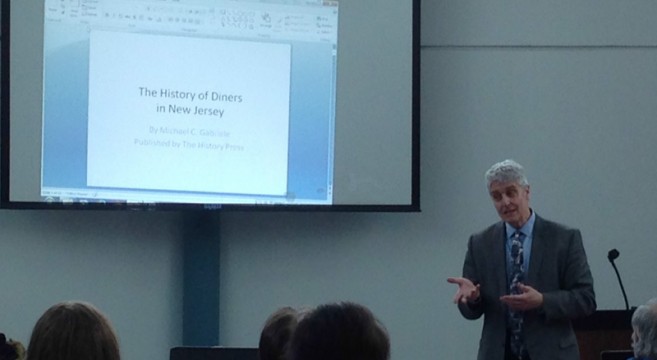 If you’ve been following our Diner Challenge series, which just started in January, you’ll probably also be interested in Michael Gabriele’s book The History of Diners in New Jersey. 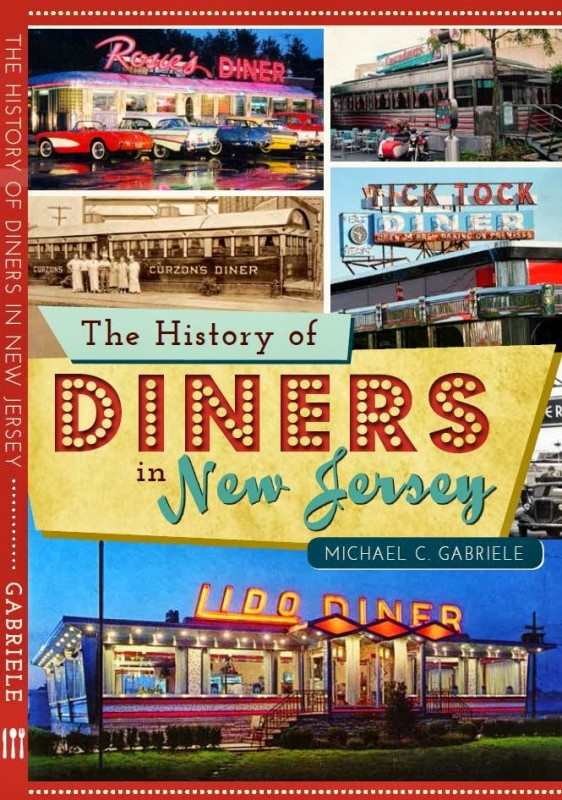 We got to meet the author at a talk held at the Old Bridge Public Library a few weeks ago and the history of diners in New Jersey is just as fascinating as the number of them in our state.  He estimated that there are between 350 and 600 diners in New Jersey.  The large range of the estimate is due to the wide variety in the possible definitions of what exactly a “diner” is.  Does it have to be open 24 hours?  Does it have to be the old railcar style? Does it have to serve breakfast all day?  Does it just have to call itself a diner to be one?  What about a restaurant that serves all the classic “diner” menu items but calls itself a cafe or bistro?  You can begin to imagine why the range includes many hundreds of possibilities.

The main reason that we have so many diners is a result of the glut of manufacturers in northern New Jersey in the 20th century.  Nearly all the classic pre-fab diners throughout the US were made right here.  There are too many companies to be a complete list who made their own variation of the aluminum-wrapped prefabricated diner-style building. However some of the most notable are:

According to Gabriele, Jerry O’Mahony was probably the first company to make lunch wagons and later, diners.  Lunch wagons were popular outside train stations, factories and other places where hungry people might be away from home and looking for a meal.  Back in the early 20th century it was much more uncommon than today to eat outside the home. Therefore lunch wagons were a way to feed people caught away from home without a place to eat.

Lunch wagons were no place for a lady, though, so quickly people began wanting “table service” with booths so that women could eat semi-privately away from counters where they might have to sit by strangers.  The O’Mahony company saw this shift in customer needs and upgraded their lunch wagon models to make room for booths and other amenities to make women customers more comfortable.

There are quite a few classic diner-style buildings still in use here in New Jersey and some outside the state, too. However those are rarer. Right off the top of my head I can think of Summit Diner in Summit, the Colonial Diner in Lyndhurst, Angelo’s Glassboro Diner in Glassboro and Mustache Bill’s Diner on Long Beach Island.  The group who came to hear Mr. Gabriele speak in Old Bridge rattled off a lot more of these beautiful old buildings.

If you love NJ history and love our great diners order yourself a copy of Michael’s book. Order one for a gift, too!