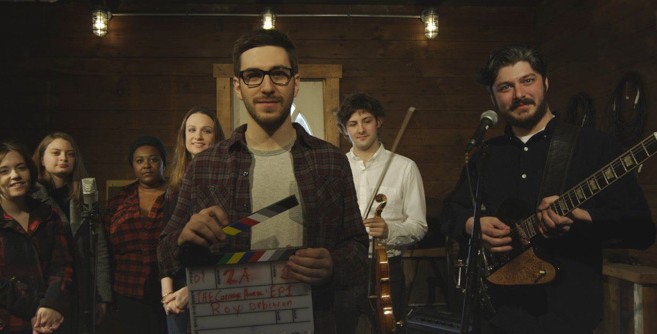 As big fans of the music and artists of New Jersey, we are thrilled when someone shines a spotlight on the great stuff coming out of our state. Carriage House TV aims to do just that. It is a new YouTube series that features New Jersey musicians playing stripped down versions of two of their songs in an intimate setting in Bordentown. In addition to the songs, the up-and-coming bands give a short, casual interview at a hang out location around the Burlington County town. This is a great way to bring some wonderful local music to a wider audience.

The series premiered on May 1st with Trenton band Roy Orbitron which makes perfect sense as singer Conor Meara and bassist Ricardo Lorenzo are co-producers of Carriage House TV. For the premier episode the band has been pared down to Meara and violinist Noah Baum and they do a great, sparse version of “Brimstone Suckers” off their latest EP Elston Allen Gunnn and Dead Man tune “Swimmer’s Ear” featuring the Sha La Las on backup vocals. Between the songs the guys chat with host Steve Sachs at Bordentown Guitar Rescue.

Future shows will feature Secret Mountain, Fond Han and Francie Moon. You can subscribe right on the clip above so you don’t miss any episodes of this unique show.

We had a chance to ask executive producer Ricardo Lorenzo a few questions.

How did you come up with the idea for Carriage House TV?

The Carriage House itself is actually the first floor of Conor’s house in Bordentown, which was recently renovated. It’s the coolest house I’ve ever seen. I’ve never been to place where there’s so much creative energy! I wish I lived there.The concept came about after my band, YJY, shot our NPR Tiny Desk competition submission. In order for bands to submit, they had to strip down their sound as they would for Tiny Desk. I showed our submission to Conor, of Roy Orbitron, and he mentioned that we should do a series similar to how Dean, our director, shot the Tiny Desk submission. Coincidentally, this all happened while Conor and I were bouncing links back and forth of various online music series. I kept critiquing how most of the series sounded and were filmed horribly and he kept critiquing how mundane some of the performances were. I reached out to some of my creative friends who I’ve worked with in music and film and we plotted out the format of the series. The series consists of two stripped down performances with an interview that’s shot around town.

Carriage House TV crew: I’m the executive producer of the series, so I oversee everything. I make sure we have the bands and the crew for each shoot. I schedule everything as well. Steve, who’s also in YJY, is the host since he’s more extroverted than any of us, social media strategist, and a creative producer. Sound was very important so I brought in Tim, YJY’s bassist and sound engineer. Conor is also a creative producer, helps scout bands, and works audio with Tim on set. It’s a curse and a blessing, but I only trust one person with a camera, when it comes to visuals and that’s Dean Luis, who is our Director and DP. Kayla Smith from Glycerine Queens is our secondary camera-person. Ian Everett of I Have Been Floated designs graphics. And last but not least,  my business savvy partner in crime is, producer, Kevin Lawton, who’s the most creative business person I know. He also scouts our interview locations.

What are you hoping to accomplish with the show?

I’m a really big fan of Tiny Desk, Out Of Town Films presents…, and the KEXP performances. If I’m on Youtube, that’s what you’ll find me watching. I love Tiny Desk for it’s unique performances, Out of Town Films for its beautiful visuals and unique locations, and KEXP for the energetic performances. I hope to create a series that’s all of those things combined, but more visually compelling. We’re treading a line with this series, because it’s difficult to have both a unique, intimate, and authentic performance and something shot beautifully and “cinematically.” The music and performance will always be the priority, but keeping cinematic visuals is what I think will keep people watching; although, some will disagree. Haha!

I know once CHTV reaches the point where I feel it has mastered keeping performances authentic and intimate along with having perfect visuals, we’re gonna have to figure out where to go next. So, I’m hoping to add a “documentary-esque” style to the series; removing interviews and having Steve hang out with bands on tour, during their recording process, preparing to pitch themselves to labels or maybe even showing the band’s process of stripping down their songs, because there is actually a tedious process to finding what songs sound good stripped down. Obviously, this comes with more prep work and dedication since it becomes a weekly or monthly shoot instead of a single day shoot. This will probably be something that comes wayyyyy down the road, but it’s an idea I’m playing with.

What do you think of the current state of music around NJ?

See, when I was 19 I was deep into the music scene when Screaming Females were just starting to dangerously fill basements in New Brunswick; Ewing had an up and coming basement music scene, and death-core was the only metal anyone listened to. 5 years later, I was in New York getting my master’s in film. During those five years, I started to slowly lose touch with the music scene. So, for the past couple of years, I’ve been catching up. CHTV has definitely helped me get back into NJ’s music scene, since we mainly scout for bands, opposed to accepting submissions. There are so many incredible bands in the Garden State. I’m finding it impossible to catch up. We have our more recent nationally known bands Nicole Atkins, Screaming Females, Titus Andronicus, etc. and a very strong local scene, Dollys, Perennial Reel, Dentist, The Cold Seas, Sink Tapes, etc. I want to keep listing but I’ll bore you. Haha!

Some people have mentioned there aren’t many places to see great, original music in South Jersey. Do you agree?

I haven’t heard of ANYTHING going on in South Jersey. So, I’m going to have to agree, but honestly, I think we could use more all-ages venues that book predominately good bands through out the entire state. We’re too dependent on Philly and NYC. It’s kind of annoying. Even, Asbury Park is an hour away from us. Starland Ballroom has been booking shit acts. We got the New Brunswick basements, but they’re not very easy to find. You gotta know people that know people to even find a show. But I’m super psyched about In The West in New Brunswick that’s probably going to become NJ’s Shea Stadium. And what the hell happened to the Meatlocker? Sorry, I digressed.

How long did it take to get this first episode done? Are you happy with it?

The actual shoot took only a day; about 12 hours. I think we shot the episode in February. It was actually post production that held us up. The editing process was extremely hectic, because audio and camera settings weren’t on par with each other and it royally f*cked me. So, we were all over the place. I managed to deal with it and make it work. Tim was a trooper during this process. Once that got fixed, we sat on the episode as we planned and shot the next couple of episodes with Secret Mountain and Fond Han. I’m really happy with the first episode. In fact, I’m proud of it, but each episode will get progressively better.

Have you already learned some things you would like to do differently from the first episode?

Definitely! We’re about to shoot our 4th episode at the end of the month and I’m noticing how much we’ve progressed from the previous shoot. Each episode is a learning experience for us. Since the first episode, we’re setting up faster and we’ve changed our format of shooting. We realize there’s more energy in the performances, when we shoot the interviews first, then the performances. It does take a few takes for bands to get comfortable in front of cameras and bright lights, so I’ve learned that complimenting and encouraging, and just being completely positive; makes the bands more comfortable and energized and your crew awake. I’m learning that you have to treat bands like you would an actor on set for a movie.

If you had to pick one long-shot artist to appear on the show who would it be?

Haha! This is such a difficult question to answer and certainly one that may create a fist fight between all of us if the opportunity arose. Haha! I’m only kidding.We all respect each other’s opinion. I’d have to say Mac DeMarco. I’d like to see how he’d strip his sound down and I’m really interested in seeing the chemistry between him and Steve.

hmmmmm. Intimate, Honest, Unique, Hysterical, and as my mom would say, beautiful.